Poland's Pro-Choice Protests are the Largest Since Solidarity 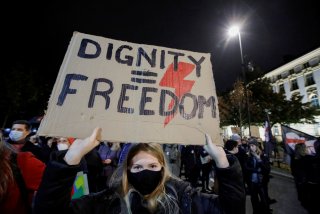 The protesting women of Poland have captured the world’s attention. Since October, they’ve taken to the streets to protest restrictions on reproductive rights that were already almost non-existent.

But far beyond just a fight against the ruling right-wing Law and Justice party, the protesters are rejecting the Catholic Church and its influence over the Polish state.

Their protests were precipitated by the recent decision of the Constitutional Tribunal — the highest Polish court, under fire recently for two political appointments — to ban abortions in cases of severe fetal abnormalities. Abortion is now only permitted if the pregnancy results from a crime — either rape or incest — or if it threatens the woman’s life.

The court’s decision, as contentious as it was, is not being made public in a move that is widely seen as illegal.

The Polish protests have been the largest since the Solidarity demonstrations of the 1980s. On their busiest days, as many as 430,000 women and their supporters have taken to the streets.

They’re protesting not just in large cities but also small towns and villages. Conservative counts estimate there have been protests in more than 400 communities, often drawing larger crowds than expected. The protests have particularly mobilized young people, who have expressed profound anger at what they view as a further assault on their reproductive rights.

Their actions have ranged from blocking streets to actually entering Roman Catholic churches and disrupting services.

Taking the protests into houses of worship has been so startling and unprecedented that the chairman of the Law and Justice party issued an appeal to far-right nationalist groups to mobilize and protect “our churches.”

Recent polls seem to confirm this rejection. The Law and Justice party is down in the polls — its support decreased from 40 to 30 per cent during two weeks of protests, and it sits at the lowest point since 2015. But the opposing Civic Platform isn’t benefiting from its opponent’s popularity drop — its support remains stuck at about 27 per cent.

Challenging the church’s hold on Poland

The protesters aren’t just calling for the expansion of women’s as well as LGBTQ rights. They’re also demanding a secular state in a direct challenge to the power the church has had over Poland since it transitioned to democracy in 1989.

The church’s teachings have had an impact on beliefs about conception, contraception and abortion that have made their way into Polish law, as have Catholic views on in vitro fertilization and euthanasia. Its doctrines also influence Polish understanding of family and the rights of sexual minorities as well as access to divorce.

Catholic religious instruction is provided in public schools and funded by the state. The church also influences public conversations and attitudes by operating 120 publishing houses that publish 300 newspapers and other periodicals, and by running the densest radio network in Europe.

That network comprises 38 regional radio stations, one national station, and boasts 117 transmission towers. For the sake of comparison, the next biggest network, a private operation, has 10.

While this all suggests Polish society holds conservative views, the mass protests signal that public attitudes are actually more liberal than those of the major political parties that have long backed the conservative compromise.

The church is wealthy

The church’s impact on social attitudes is fuelled by its wealth. It received vast land holdings in compensation for losses under communism, and it is now considered the largest landholder and landlord in Poland.

It also continues to be funded by the state. The extent of funding isn’t made public by the Polish government, but it is estimated to range between $340 million to $1.7 billion in Canadian dollars per year.

This power and wealth remain undiminished, regardless of which political party is in office. The Law and Justice party is open about its theocratic tendencies and friendly ties to the church, but the liberal Civic Platform has never limited the church’s power, and it’s unclear if it’s ever tried while in power.

The women’s movement in Poland faces a powerful and as yet unchallenged adversary in the country’s Catholic Church. One source of hope for those supporting expanded reproductive rights is the fact that the protesters have correctly shone a spotlight on the church for its undue influence over the country’s politics.