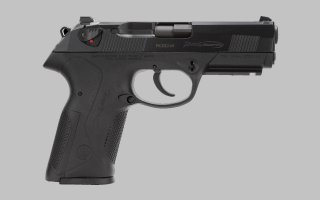 When it comes to pure stopping power, few pistol rounds beat the 45 ACP, which can also be used for concealed carry pistols. Many people want pistols chambered in .45 ACP for self-defense and everyday carry, so here we are going to tell you about some of the best concealed carry 45 ACP pistols on the market.

Beretta is one of the most prolific firearms manufacturers in the world and is known to make some incredible pistols like the Beretta 92 FS a variant of which, in the better M9 stayed the standard-issue sidearm for the US military for over 20 years.

However, the Beretta Px4 Storm is a very underrated pistol from the same company, which deserves more recognition.  Chambered in 45 ACP, this pistol has a modern rotating 4-inch barrel, which mitigates recoil, and improves accuracy as well.

It has a polymer frame and is a double-action single-action pistol like the Beretta M9. It is hammer-fired, has an ambidextrous safety, and de-cocker as well. The Px4 Storm stands out because of its unique design, which might look a little different, but fits great in the hand.

As far as magazine capacity is concerned, the Beretta Px4 Storm can hold 9 rounds of 45. ACP plus one in the chamber.

The smooth shooting Beretta Px4 Storm is also very reliable, it is a NATO certified pistol, with military trial reports stating that it has gone through 150,000 rounds without any breakages.

So, if you are looking for a light, smooth shooting, hammer-fired, pistol, the Beretta Px4 is an excellent option.

If you want a concealable revolver instead of a semi-automatic, then the Charter Arms Pitbull is one of the best options. It is specifically designed for semi-automatic cartridges, like the 9mm, 40 S&W, and .45 ACP.

It has a rubberized grip for better handling and a short 2.5-inch barrel for concealability. The revolver weighs 22 ounces unloaded. It can carry five rounds of  .45 ACP, however, you may need to use a little force while loading in the rounds. The pistol has a simple set of integrated sights.

Like any revolver, the trigger pull is long and heavy, but it does feel better when firing single action. Overall, it is one of the best options if you want a wheel gun for self-defense, with the stopping power of .45 ACP

When anyone talks about the .45 ACP round, the first pistol that comes to mind is 1911, well the ECP (Enhanced Combat Pistol) from Dan Wesson is a 1911 style pistol, made with concealability in mind. Dan Wesson is an American manufacturer known for making revolvers, however, since it was acquired by CZ, another big player in the gun world, it has been making the officer size 1911s, which are one of the best in the market.

It is a very well-crafted pistol, with an alloy frame and a steel slide. The pistol has a tilting barrel design, which is a hallmark of the 1911s and has amazing performance. As far as magazine capacity is concerned, like any 1911, it can hold 8 rounds in the magazine, plus 1 in the chamber.

1911s are very thin pistols, because of the single stack magazines, which makes them easily concealable as well. The pistol has a 3.5-inch match-grade barrel and a skeletonized fast hammer.

Though it might be a little on the expensive side, it is one beautiful-looking firearm, made from high-level craftsmanship.

Glock is an Austrian farm company specializing in polymer frame pistols. Glock makes some of the best handguns in the world, which are used by law enforcement and the military all over the world.

Though you can get a lot of different size Glocks chambered in a variety of calibers, if you really want a concealed carry 45 caliber pistol, the Glock 30s is one of the best options. Like all Glocks, it is also a polymer frame gun with a steel slide and a tilting barrel. It has a slimmer profile than a normal Glock, which is known to be bulky, and weighs around 20 ounces unloaded, which makes it perfect for concealability.

It is a striker-fired pistol, with fixed Glock sights, that get a lot of mixed opinions from shooters. One of the best things about the Glock 30s is that it holds 10 rounds of .45 ACP in the magazine, plus one in the chamber, which is probably the largest round capacity that you can get in a concealed carry .45 pistol, especially as compact as the Glock 30s.

Like all Glocks, the G30S is very reliable and has an excellent trigger.

Heckler & Koch is a German firearm company known for making perhaps the best pistols, rifles, and SMGs in the world. They have many many incredible firearms like the MP5 and an HK G3 battle rifle.

When it comes to pistols, the HK45 is one of their best products. When the US military was replacing 1911 as their standard-issue sidearm, the HK45 was also in consideration and made through all the military trials. It is still used by some special units in the US military.

The HK45 Compact has a more ergonomic grip than the full size, with a lower profile for better concealability. It is a hammer-fired gun, with a polymer frame and a steel slide. It features an ambidextrous slide release and magazine release for better useability by all shooters.

The magazine holds 8 rounds of 45 ACP, with one in the chamber. The barrel is 3.9 inches long, which means that the HK 45 compact is the smallest gun on this list, but it is quite concealable, and super reliable, and easily shootable.

Most semi-automatic .45 ACP pistols can get a little bulky, however, the CW45 by Kahr Arms is only 1 inch thick, which makes it one of the most concealable .45 pistols on the market.

The Kahr Arms CW45 is a high-quality polymer frame gun, with a steel slide. It has a 3.64-inch barrel and an overall length of a little over 6 inches. Their pistols weigh 19.2 ounces when unloaded. The magazine holds 7 rounds of 45 ACP.

When it comes to safety, the pistol doesn’t have any external safety lever, it has a long double-action trigger, and an internal firing pin safety as well. It has a decent set of sights, with the rear sight also being adjustable for windage.

Overall, the Kahr Arms CW45 is an excellent subcompact pistol for concealed carry

Smith and Wesson are one of the most iconic firearm production companies in the US, particularly known for their incredible revolvers and semi-automatic pistols. Their M&P 45 Shield is a popular pistol, ideal for concealed carry if you are a .45 ACP fan.

The pistol is recoil-operated and striker-fired, and it has a polymer frame with a steel slide. For concealability, the M&P 45 Shield M2.0 has a 3.3-inch barrel. As far as magazine capacity is concerned, the pistols carry 6+1 rounds, or with the extended mag, which also extends the grip, you can carry 7 in the magazine with 1 in the chamber.

The slide has serrations in the front and the back, with three post-standard sights for aiming. The grip has aggressive texturing, which really helps in controlling the .45 ACP caliber in this small pistol. Overall, the pistol has a weight of 20 Ounces when unloaded.

The M&P 45 Shield M2.0 Shield has a really good trigger that is the same as the original shield.

Springfield is one of the oldest firearm manufacturers in the US, and they are known for making some incredible pistols and rifles, particularly some of the best high-end 1911s, however, they also have a popular striker-fired range of pistols known as the XD.

The XDs is a single stack version of the XD, aimed for the concealed carry market originally the pistol came chambered in .45 ACP, however, they also introduced a 9mm version later.

The XDs MOD 2 has a 3.3-inch barrel. It is a striker-fired pistol, with a polymer frame and steel slide. It has an ambidextrous slide magazine release, with a slide release only on the left. The XDs MOD 2 has trigger safety. In the sights department, this is one of the better options, since it has front fiber optic sights, which no other pistol on this list has.

As far as appearance is concerned, the most notable upgrade in the MOD 2 over the original XDs is the more refined grip texturing. The flush magazine holds 5 rounds of .45 ACP, whereas the extended magazine, with a grip extension holds 6 rounds.

If you are a 1911 fan and you don’t want to carry anything else for concealed carry, the 1911 officer model is a great option. However, like all 1911s, they can be quite expensive.