Predator Snails Fend off the Invasion of Barnacles in Japan 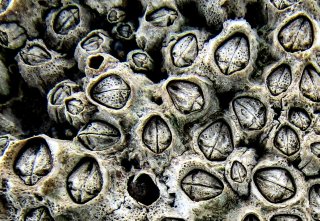 Introduced species can have tremendous ecological effects and can become a major threat to ecosystems. Invasion biology tries to understand the mechanisms that can limit and control the impacts of introduced species.

Through global shipping routes, barnacles have been introduced to coastlines worldwide. An example is the barnacle Balanus glandula, native to the North American Pacific coast and transported by ships to the Pacific coast of Honshu, Japan, where it has replaced several native barnacle species. From Honshu, B. glandula spread to eastern Hokkaido (northern Japan), where it occurs in relatively low densities compared to the native barnacle Chthamalus dalli.

Furthermore, B. glandula has reached as far as the Atlantic coasts of Argentina and South Africa, with negative effects on native barnacle populations and other seafloor dwellers.

Biotic resistance is the ability of native species to limit the spread of invasive species. Working as marine ecologists at Akkeshi Marine Station, on the Pacific coast of Hokkaido (Takefumi Yorisue, Kyosuke Momota), and the Marine Ecology Lab, Saint Francis Xavier University in Nova Scotia (Julius A. Ellrich), we established an international collaboration to investigate the low B. glandula densities in Hokkaido rocky intertidal habitats.

In Hokkaido, the native predatory snails Nucella lima — more commonly known as dogwhelks — and herbivorous snails, Lottia cassis, known as limpets, are common. Dogwhelks have a particular appetite for barnacles: previous research in Atlantic Canada revealed that dogwhelks have nonconsumptive effects (NCEs) — behaviours that do not include consuming the barnacles — that can limit the appearance of new barnacles. These NCEs are triggered by dogwhelk chemical cues that limit barnacle cyprid larvae settlement. Cyprids swim away from dogwhelk cues to reduce the risk of being consumed by dogwhelks.

Research has shown that as limpets graze, they can accidentally ingest or disturb cyprids. These actions, known as disturbance effects (DEs), also limit the appearance of new barnacles.

We hypothesised that the native dogwhelks and limpets would contribute to biotic resistance against B. glandula. To test our hypothesis, we conducted a series of experiments in Akkeshi Bay, in Hokkaido. We examined dogwhelk feeding preferences for barnacles in the laboratory and dogwhelk NCEs and limpet DEs on barnacle population growth in the field.

These preferences are likely driven by prey profitability: previous research with dogwhelks on the North American Pacific coast indicated that dogwhelks that fed on B. glandula grew faster than those who fed on C. dalli, and dogwhelks fed with large B. glandula individuals grow the fastest.

We examined the effect of dogwhelk NCEs on B. glandula settlement and population growth. For that, we installed cages with mesh compartments in the harbour of Akkeshi Marine Station. The cages prevented the dogwhelks from feeding on the barnacles, and we found that the presence of dogwhelks limited the growth of B. glandula populations by 56 per cent.

We conducted a similar experiment using limpets in a cage with the barnacles. We found that feeding limpets limited the growth of B. glandula populations by 81 per cent.