Preventing a Russian Invasion of Ukraine Starts With Deterrence 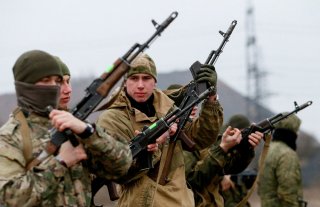 Here’s What You Need to Remember: The Biden administration is also right to limit what it offers to Putin. It is one thing not to bring Ukraine into NATO now; it would be quite another to rule it out permanently. The same holds for any assurances that might be extended to Russia about other NATO policies. Diplomacy should never be confused with capitulation.

In recent months, Russia has positioned a large and capable military force along its border with Ukraine. What we do not know is why Russian President Vladimir Putin has done this (capabilities are always easier to gauge than intentions), or even if he has decided on a course of action. Thus far, Putin has created options, not outcomes.

What comes to mind is July 1990, when another autocrat, Saddam Hussein, positioned sizable military forces along Iraq’s southern border with Kuwait. Then, as now, intentions were murky but the imbalance of forces was obvious. Arab leaders told US President George H.W. Bush not to overreact, convinced it was a ploy to compel Kuwait to take steps to increase the price of oil, which would help Iraq recover and rearm after its long war with Iran.

By early August, though, what to many had looked like political theatre had become all too real. Invasion led to conquest, and it took a massive international coalition led by the US to oust Iraqi forces from Kuwait and restore the country’s sovereignty.

Could a similar dynamic be playing out today on the Russia–Ukraine border?

US President Joe Biden’s administration has reacted to Russia’s troop buildup with a mix of honey and vinegar. The objective is to persuade Russia not to invade by making clear that the costs would outweigh any benefits and that some Russian concerns could be addressed, at least in part, if it backed off. Call it deterrence mixed with diplomacy.

Some have criticised the US response as too weak. But geography and military balance make direct defence of Ukraine all but impossible. Biden was right to take direct US military intervention off the table: not acting on such a threat would only reinforce mounting doubts as to America’s reliability.

But Biden is also right to push back against Russia. The US and the UK, along with Russia itself, provided assurances to Ukraine in 1994 that, in exchange for giving up the nuclear arsenal it had inherited from the Soviet Union, its sovereignty and borders would be respected. This did not constitute a NATO-like security commitment, but it did imply that Ukraine would not be abandoned.

And yet some who oppose direct resistance of Russian aggression against Ukraine support it in the case of possible Chinese aggression against Taiwan. In both instances, geography works against US military options, and in neither is the US bound by an ironclad security commitment. But in the case of Ukraine, NATO allies are not prepared to defend against a Russian attack and are not expecting the US to do so. By contrast, US allies and partners are prepared to resist Chinese aggression and expect that the US would help frustrate any Chinese bid for regional hegemony.

This does not mean Russia should have a free hand versus Ukraine. Whatever order does exist in the world is premised on the principle that no country is permitted to invade another and change borders by force. This more than justifies providing Ukraine with arms to defend itself, as well as threatening to impose severe economic sanctions that would exact a significant cost on Russia’s already fragile, energy-dependent economy.

Biden is also right to offer a diplomatic path for Putin if he decides it would be wiser to walk back from the brink. Several worthy ideas have been suggested: stepped-up US participation in the Minsk diplomatic process initiated in the wake of Russia’s intervention in eastern Ukraine in 2014, a mutual pull-back of Russian and Ukrainian forces from their shared border, and a willingness to discuss with Russia the architecture of European security.

The Biden administration is also right to limit what it offers to Putin. It is one thing not to bring Ukraine into NATO now; it would be quite another to rule it out permanently. The same holds for any assurances that might be extended to Russia about other NATO policies. Diplomacy should never be confused with capitulation.

At the end of the day, what comes next is Putin’s decision to make. He sees Ukraine as an organic part of greater Russia, and may well seek its incorporation to cement his legacy and reverse—at least partly—the collapse of the Soviet Union, which he described in 2005 as ‘a major geopolitical disaster of the century’. One hopes that a policy of raising the costs of invading and offering some face-saving gestures will convince Putin to defuse the crisis he has created.

If, however, deterrence fails and Putin does invade, promised sanctions will have to be introduced. That includes scrapping the Russia-to-Germany Nord Stream 2 gas pipeline and imposing real costs on Russian financial institutions and Putin’s inner circle. It would be a moment, too, to strengthen NATO and provide Ukraine with additional arms, advice and intelligence.

This brings me back to Iraq, but in 2003 and the following years. The US invaded out of a concern that Saddam was hiding weapons of mass destruction and because it saw an opportunity to spread democracy, not just to Iraq but throughout the Arab world. But while the war began with a massive ‘shock and awe’ air campaign and the rapid fall of Baghdad, consolidating military advances proved to be both difficult and costly as urban-based militant groups provided stiff opposition to US-led troops. The American people turned against the war and a foreign policy judged to be overly ambitious and enormously expensive.

A similar fate could await Russia should its troops march on Kyiv and try to control most or all of Ukraine. Here, too, consolidating control in the face of widespread, heavily armed resistance could prove extremely difficult. Large numbers of Russian soldiers would return home in body bags as they did from Afghanistan following the 1979 Soviet intervention. A decade later, Soviet troops were gone from that country, as were the Soviet leaders associated with the invasion. The Soviet Union itself disintegrated. Putin would be wise to reckon with the lessons of this past before deciding on the future.