Pro Tip: Don't Buy a 'See Through' Glock from Pakistan 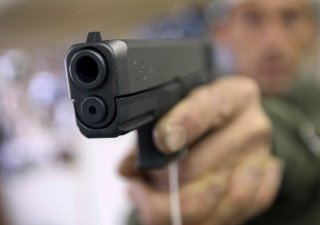 Key Point: Glocks are good, but only if they are made right. Here's why you should think twice about buying one.

Early in 2019, photos of a Glock with a clear frame began to circulate on the Internet. The design is certainly eye-catching, providing a clear view into the magazine and internal workings of the gun. Bearing Glock trademarks on the slide and frame matching a Glock 19 Gen 4, some people speculated that it was a Glock OEM frame built on a limited custom run for demonstrations. Some said it was an official version of a clear frame produced by one maker of custom Glock frames, Lone Wolf Distributors, in 2013. But many people still wanted to know: who made the original?

Thankfully, a video by Khyber Armory in May 2019 revealed that the clear Glocks were, unsurprisingly, made in Pakistan’s famous Khyber Pass region—making them a very good clone, not an original. This allows for the frames to be produced with full Glock trademarks, as patent law in Pakistan probably does not allow even Glock’s notoriously strict patent lawyers to prosecute the manufacturers of the clear-framed Glock-clones.

The frames themselves are said to be made in China or in an injection-molding facility in Lahore, Pakistan, while the slides are CNC milled on site. Additional options such as custom stippling, additional serrations, etc. can be added upon customer request.

But despite the striking looks, the clear-framed Glock is probably not very suitable for actual use. In the video, Khyber Armory states that hundreds of rounds have been fired through the clear framed Glock-clone, but service Glocks usually fire thousands of rounds over their lifetime.

Transparent polymer has significant trade-offs vs. their nontransparent counterparts. UV resistance, problems at higher temperatures, and a weakness to DEET and other chemicals are all issues that affect transparent polymers. Magpul declined to make a fully transparent version of their popular PMAG for these reasons. While the physical demands for a magazine and a pistol frame are different, it’s unlikely that the clear Glock frame clones are up to the durability standards of the original due to their material.

The ability to see the magazine in the grip of the gun, while nice on paper, doesn’t provide many advantages over a stock Glock. Regular Glock magazines have witness holes at the rear of the magazine that provide an accurate count of how many rounds are remaining, while looking at the rounds at the side of the pistol through the frame would be more akin to a guess.

That’s not to belittle the accomplishment of the gunsmiths in Darra, Pakistan. They have created an almost impeccable clone of the Glock 19 Gen 4, with an additional aesthetic flourish to showcase the wider range of options they can provide compared to Glock themselves. With modern CNC machinery, “Khyber Pass” clones have become almost indistinguishable from the originals. The transparent Glock shown in the video is the same down to the metal bar with the frame’s serial number embedded in the slide’s dust cover.