Project Habakkuk: Churchill’s Plan for an Aircraft Carrier Made of Ice 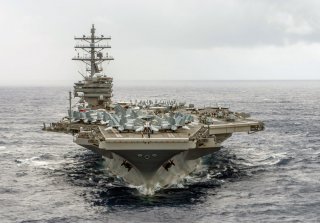 Lasting five years, eight months and five days, the Battle of the Atlantic was the longest military campaign of WWII. Allied supply convoys were being continuously threatened by German U-boats and Luftwaffe aircraft, and when Italy’s Regia Marina introduced submarines into the mix when they entered the war in June of 1940, Allies were exhausting every idea possible to protect lives along with invaluable resources. Enter Winston Churchill, an unmatched powerhouse of a leader during the war who, in this instance, spearheaded a project more akin to a fictional Bond villain than a 1940’s combat strategy.

The idea itself was simple enough in theory: create an aircraft carrier using as many natural resources as possible, in an attempt to mitigate the high cost of materials like steel, which was in short supply. Pike’s solution was ambitious to say the least. Instead of costly materials that were in high demand, he’d build his aircraft carrier out of one of the most plentiful materials on earth: water, or more accurately, ice.

Invented by an outside-the-box thinker

The concept came from British journalist, educator, and inventor, Geoffrey Pyke. Pyke was no stranger to the perils of war, having been in a German internment camp during WWI after being caught traveling there using someone else’s passport, in an attempt to work as a war correspondent. He had been arrested just six days after he arrived, and spent over 100 days in solitary confinement before escaping. Despite his continued contributions to both war efforts, he would go on to struggle both personally and professionally, before committing suicide in 1948 at age 54. The British paper “The Times” printed his obituary, which included, “The death of Geoffrey Pyke removes one of the most original if unrecognized figures of the present century.”

The aircraft carrier would be the second significant proposal Pyke would make during WWII. The first was following Germany’s invasion of Norway, when it became clear there needed to be a better way to transport troops through the snow and another difficult-to-traverse terrain. Project Plough was Pyke’s motion to build a screw-propelled vehicle, based loosely off of old patents for Armstead snow motor vehicles. It would be the first time he would get the attention of Louis Mountbatten, the newly appointed Chief of Combined Operations. Mountbatten would bring the inventor, and his ideas, in front of Winston Churchill. Despite the interest in the project, Canada and the U.S. beat Britain to the punch when they began producing the M28 (then T15) and M29 Weasel, both inspired by Pyke’s original design.

It wouldn’t be long before Pyke and Churchill would see eye to eye on another idea. Project Habakkuk, as it would be known, was supposed to be the answer to the increased presence and efficacy of Allied air forces in the Atlantic.

Pyke chose the name based on the bible verse Habakkuk 1:5, which reads as hubristic optimism for the success of the project.

“Behold ye among the heathen, and regard, and wonder marvelously: for I will work a work in your days which ye will not believe, though it be told you.”

“Look at the nations and watch – and be utterly amazed. For I am going to do something in your days that you would not believe, even if you were told.”

What would Pike’s Habakkuk apart from traditional aircraft carriers was the fact that it would be made almost entirely of a combination of ice and wood pulp. Eventually dubbed ‘Pykrete’ (named dually after Pyke and its strength compared to concrete), these two materials would become the main focus of his research and development. With the help of molecular biologist, glacial expert, and eventual Nobel Prize-winning protein chemist Max Perutz, and a hidden refrigerated meat locker underneath London’s Smithfield Meat Market, Pyke was able to fine-tune the functionality of the pykrete, while also discovering some of its unavoidable challenges.

Perutz determined 14% sawdust or wood pulp to 86% ice was the ideal breakdown for structural soundness, and championed the prospective benefits of a full-scale carrier that could utilize seawater when necessary to repair damages. It wouldn’t be easy, however. Expansion during freezing made construction more difficult than Pike anticipated, and the ice/sawdust mixture would start bowing under its own weight at temperatures above five degrees Fahrenheit (-15°C).

Despite the new structural considerations, a small-scale model of the Habakkuk was greenlit, and a team started work in Jasper National Park, a 4,200 square mile park within the Canadian Rockies. In addition to troubleshooting the known issues, the goal of the scale model was to test environmental durability as well as how pykrete held up against various weapons and explosives. The 60 foot long, 1,000-ton model took eight men around two weeks to complete, and seemed to hold up well enough to both nature and manmade adversaries. Upon its completion, Churchill almost immediately announced the order for the real thing, full scale, and with the highest priority of importance.

A full-scale Habakkuk was a tall order, and while completion was optimistically slated for mid-1944, the supply list would prove to be a living document. The original list called for 300,000 tons of wood pulp, 25,000 tons of wood fiber insulation, 35,000 tons of timber and a conservative 10,000 tons of steel. All of this totaled around £700,000 (equivalent to just under $10.6 million today). Seasonally driven temperature changes quickly made the team realize that using steel as internal support was not only necessary, but would require much more of it than they had initially estimated. Factoring in more steel, the final proposed cost would be triple what had been anticipated, sitting at £2.5 million.

A False Prophet: Issues in the ice

The project also wasn’t without some creative differences and office politics. Britain wanted to ensure America was invested in the idea, and began to phase Pyke out of the process. Back during Project Plough, Pyke had some significant conflicts with Americans working on his designs, causing him to be removed from that project well before it was ultimately scrapped. While Pyke’s exclusion had little bearing on the final outcome, the timing of it fell towards the beginning of the end for Habakkuk.

The summer of 1943 welcomed more criticisms and observations, and with them, higher expectations for the carrier. With a 2,000 foot runway to accommodate the Royal Navy’ heavy bombers, and 40-foot thick walls to withstand torpedos, the Habakkuk carrier would end up displacing 2,000,000 tons of water (compared to the U.S. Navy’s Nimitz class carrier, which at just over 1,000 feet, only displaces about 100,000 tons). It was also expected to have a 7,000 mile range and be able to handle the highest recorded waves on the open sea. However, its immense size, along with concerns about speed and steering, soon made it more and more clear that the odds may be stacked against Pike’s Habakkuk.

The last meeting about the build took place in December of 1943. By this time, a number of factors had changed in regards to the war itself, and that, coupled with the challenges they were already facing, ended up being the final nail in the coffin for the project. Portugal had given the Allies permission to use their airfields in the Azores, which allowed them the opportunity of deploying more airborne U-boat patrols over the Atlantic.

An increased number of traditional aircraft carriers, as well as newly introduced and integrated long-range fuel tanks that allowed for longer flight times over the Atlantic, essentially made the Habakkuk obsolete before it could even take shape. The prototype found its final resting place at the bottom of Jasper’s Lake Patricia.

In his collection of essays titled, “I Wish I’d Made You Angry Earlier: Essays on Science, Scientists and Humanity,” Pertuz concluded:

“The US Navy finally decided that Habakkuk was a false prophet.”

Myth Busting: The return of the Habakkuk

While the world never got to see the larger-than-life, movie-villain-worthy tactical ice island, there were two special effects experts who decided to put Pyke’s pykrete to the test.

In a 2009 episode of MythBusters (ep. 115 “Alaska Special”), fabrication wizards Adam Savage and Jamie Hyneman wanted to explore the validity of some of the claims made about pykrete. The first was the idea that it was bulletproof, which the two believed they confirmed after their test of firing .45 caliber rounds into a block of solid ice, which shattered on impact, and a block of their own pykrete, which only sustained a 1-inch deep gash when it was hit.

The second “confirmed” theory was that pykrete was inherently stronger than ice on its own. Through a mechanical stress test using a cantilever, Adam and Jamie found that the solid ice broke at only 40lbs of pressure, while their pykrete supported all 300lbs – and a few hits with a hammer- before it fractured.