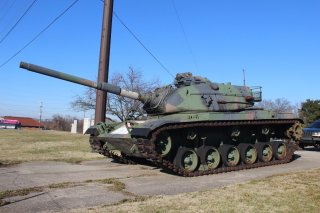 Here's what you need to remember: The Patton may reliably soldier on and contribute its heavy firepower to the battlefield—but in an era where minimizing casualties and denying propaganda victories to the other side is important, its dated armor protection will remain a liability.

The M60 traces its ancestry all the way back to the M26 Pershing heavy tank, a few dozen of which saw action at the end of the World War II. The Pershing was evolved into a series of Patton tanks armed with 90mm guns, including the M46, M47, and M48. The M60, introduced in 1960, was the last: a tall-profiled brawler designed to outmatch the ubiquitous Soviet T-54 tank by virtue of its heavier armor and long M68 105 millimeter gun.

The 50-ton M60s were deployed to Europe in case World War III broke out and didn’t see action in the Vietnam War, except for some bridge-laying and engineering variants. Instead, M48 tanks took on North Vietnamese PT-76s and T-54s in a small number of engagements and even battled Swedish-made tanks in the Dominican Republic.

Now, the prototype filmed in Raytheon’s promo video also has a lot of features they don’t advertise: slat armor, which can be effective at deflecting shaped charge warheads in rocket-propelled grenades, add-on armor panels, and an auxiliary power unit and cooling fans in the back. It appears that these are not standard features of the SLEP upgrade.

For comparison, the Israeli Sabra II upgrade also boasts a 120 millimeter gun of comparable performance paired with a new targeting computer, as well as a superior 1 thousand horsepower engine which increases speed to 34 miles per hour. Unlike the SLEP, the Sabra also has beefed-up armor, giving the turret an angular shape. This includes the addition of explosive-reactive armor—that is, bricks of explosive that prematurely detonate incoming missiles and shells –as well as appliqué armor plates.

A similar Mag’ach 7C tank fitted with appliqué armor reportedly survived eighteen hits from Hezbollah AT-3 Sagger missiles without being penetrated. However, the Sagger dates back to the 1960s and current missiles have a far greater penetrating power.

However, the majority of tanks on the battlefield these days aren’t fighting other tanks. They’re exchanging fire with insurgent infantry—increasing numbers of whom are packing modern long-range anti-tank guided missiles like the Kornet, as well as more widespread short-range rocket-propelled grenades. The best of these weapons have proven effective even against modern tanks such as the M1 and Merkava.

The Patton is considerably more vulnerable than the M1 or Merkava—and even the older T-72! The Patton’s old-fashioned cast steel frontal armor is rated equivalent to 253 millimeters Rolled Hardened Armor, the standard measure of tank armor effectiveness. Modern tanks use composite armor which is drastically more effective for the same weight, especially against shaped charge warheads. A modern M1A2 is rated equivalent to around 800 millimeters versus tanks shells and 1300 verses shaped charges.