Pseudo-Aircraft Carrier: Japan Is Making One the Real Deal 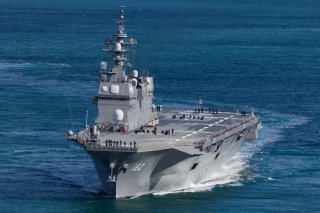 Key Point: By the time of Pearl Harbor, in December 1941, Japan had the best aircraft carrier fleet in the world. The Imperial Japanese Navy’s A6M Zero fighter planes and their pilots were also the best in the world.

But post-war Japan could be forgiven for lack of nostalgia for things that only brought them death and defeat. The constitution of born-again Japan forbade offensive war and those weapons that might enable it, such as aircraft carriers.

But that’s not exactly true. The Japanese Maritime Self-Defense Force has aircraft carriers—sort of. The two Hyuga-class and the two Izumo-class vessels are designated “helicopter-destroyers,” equipped with a squadron of anti-submarine helicopters. But to a casual observer, they sure look like aircraft carriers, with the familiar flat deck and the bridge rising from the side of the deck. At 19,000 tons, they’re a shadow of the U.S. Navy’s 100,000-ton nuclear-powered carriers, or even Britain’s new 65,000-ton Queen Elizabeth-class flattops. But with modern U.S. destroyers weighing less than 10,000 tons, calling these ships “destroyers” is a bit of a stretch.

Now, Japan’s pseudo aircraft carriers appear poised to become real ones. Japan has announced plans to buy forty-two U.S. F-35B stealth fighters, and convert the ship Izumo to operate them. The F-35B is the short take-off and vertical landing (STOVL) variant of the F-35: they can be launched from an inclined “ski jump” flight deck on a carrier, and then land vertically like a helicopter. This allows much smaller carriers, like the 800-foot-long Izumo-class, to operate aircraft compared to traditional carriers like the 1,100-foot-long U.S. Ford-class.

So why not simply build a conventional aircraft carrier that can launch and recover more and bigger aircraft, instead of what is essentially a mini-carrier operating perhaps a dozen F-35Bs? “According to the Japanese government’s interpretation of the constitution, Japan cannot possess “attack aircraft carriers,” Narushige Michishita, a security expert at the National Graduate Institute for Policy Studies in Tokyo, told the National Interest. “This means that it can possess other types of carriers including the Hyuga-class flat-deck carriers designed mainly for anti-submarine warfare.”

“There has been a long-standing bureaucratic assumption and understanding that an aircraft carrier would not automatically violate the constitution,” Corey Wallace, who studies Japanese security issues, told the National Interest.

“If it has a full air wing complement that can be fully serviced and launched fully loaded with ordnance,” Wallace explained. “If the carrier is built for simultaneous launch and recovery, and if nuclear powered -- meaning longer distance and more sustainable projection of power. Then that would be a platform exclusively for the destruction of the civilian and military infrastructure of another country, and beyond the minimum needed for Japan’s self-defense. Which is what prohibited war potential means in Japan and has for some time. Not the banning of capabilities with potential offensive uses, which is what most believe.”

However, Ben Rimland, who also studies Japanese defense policy, says the question involves “Article 9 in the constitution, which prohibits “war potential” and which throughout Japan’s history has always been defined in terms relative to the local balance of power. Japan cannot possess such a military overmatch that would enable sustainable, aggressive operations.”

But as always when the letter of the law meets the harsh demands of military necessity, there are complications. For example, Japanese government defense guidelines allowed “self-defense” weapons but barred capabilities that could be used for offensive strike operations, such as smart bombs or aerial refueling that could extend the range of Japanese warplanes. This meant that air-to-air missiles to shoot down Chinese bombers attacking Japanese territory were acceptable, but not missiles to knock out airfields in China launching those bombers.