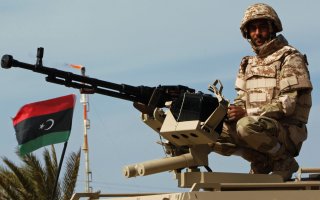 Here's What You Need to Remember: If anyone has reason for unhappiness that the bombs missed, it's Hillary Clinton.

It was the night of April 14, 1986, when twenty-four Air Force F-111F Aardvark strike aircraft, backed by five EF-111 jamming aircraft, took off from their airfields in Britain. Instead of flying directly to Libya, the F-111s had to take a long, circuitous route because France, Italy, and Spain refused to allow them to overfly their territory. As they neared the Mediterranean, the Aardvarks descended to low altitude to avoid radar detection.

The Navy aviators who were catapulted into the air a few hours later had a little easier journey. An attack force of A-6, A-7, EA-6 and F/A-18 aircraft was launched from the carriers America and Coral Sea cruising in the Mediterranean. The Air Force and Navy fliers were tasked with striking a half-dozen barracks, airfields and training camps, as well as knocking out the Libyan air defense network and its expensive Soviet-made missiles, guns, and radars.

The reason the U.S. planes were in the air that night was Qaddafi. Some considered the flamboyant dictator a lunatic, with his Amazonian female bodyguards and his "Green Book" of political ideology. Others considered a canny leader who had held on to power after seizing control in a military coup on 1969.

But to President Ronald Reagan, he was a dangerous troublemaker who had smuggled arms to the IRA, supported other terrorist groups all over the world, and disputed U.S. freedom of navigation off the Libyan coast. The final straws were an alleged attack on U.S. Navy F-14 jets by two Libyan jets that were promptly shot down, followed by the bombing of a disco in Berlin that killed or injured more than two hundred people, including many U.S. soldiers.

"The President said, 'We’ve got to put him back in his box,'" recalled Reagan administration budget director James Miller.

The instruments of Qaddafi's chastisement came in the form of the Pave Tack laser-guided bombing systems on the F-111s, and the jammers and antiradar missiles on the EF-111s and Navy aircraft.  More than twenty Libyan aircraft were destroyed and several military installations were damaged, though the F-111 and its smart bombs did not perform as well as expected. "Unfortunately, only four of the F-111s successfully dropped their bombs," says the Air Force official history. "Seven others missed their targets, while six encountered mechanical problems or did not drop because of stringent rules of engagement."

On the other hand, while Qaddafi proclaimed a great victory, it was anything but.  "Libyan air defenses performed poorly particularly in view of the warning time involved," writes Australian historian Carlos Kopp. "Intense but uncoordinated AAA [anti-aircraft artillery] fire was encountered and the Libyans fired a large number of SA-2, SA-3, SA-6 and SA-8 SAMs most of which were not correctly guided in the absence of radar and full communications."

Still, dozens of civilians had been killed, reportedly including Qaddafi's infant daughter (though she might have survived). And Qaddafi remained in power until Libyan rebels executed him on October 20, 2011.

It is not clear whether Qaddafi himself was targeted. But what if he had been killed in the U.S. raid? It was a very different world thirty years ago. In 1986, the Soviet Union was still a superpower, Osama Bin Laden was using American weapons and money to fight the Soviets in Afghanistan, and the Arab Spring was many seasons in the future. Who would have taken power in Libya? Perhaps it would have been the military, or another strongman. It would almost certainly not have been a democratic government.

Muslim fundamentalists tried multiple times to assassinate Qaddafi. If the Libyan state had held together after his hypothetical demise in 1986, perhaps it would have been strong enough to keep the fundamentalists in check. Even if it wasn't, the situation would probably have resolved itself long before Hillary Clinton became Secretary of State, and the U.S. consulate in Benghazi was attacked on Sept. 11, 2012.

If anyone has reason for unhappiness that the bombs missed, it's Hillary Clinton.