Quarantining People in Hotel Rooms - Is it Ethical? 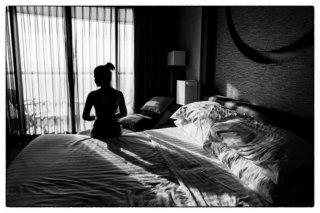 The UK government announced that from February 15, British and Irish residents travelling to England from “red list” countries will have to quarantine in a government-sanctioned hotel for ten days, at a personal cost of £1,750. Accommodation must be booked in advance, and people will need to have two COVID tests during the quarantine period.

Failing to quarantine in a designated hotel carries a fine of up to £10,000, and those who lie about visiting a red list country could face a ten-year prison sentence.

Other countries have already implemented mandatory hotel quarantines for travellers, including Australia, New Zealand, China and India. When are such quarantines ethical? And who should pay for them if they are?

International travel represents a significant transmission risk, and some countries implemented hotel quarantine policies much earlier in the pandemic (in March 2020 in Australia’s case). The public health risks of international travel are perhaps higher now due to the new coronavirus variants that are dominant in countries such as South Africa and Brazil. Cases of these variants have already been recorded in the UK.

One way of preventing further transmission would be to ban all incoming international travel. The UK has indeed imposed a travel ban from red list countries, but the ban does not extend to British and Irish nationals, nor does it include third-country nationals with residence rights. The new hotel quarantine policy applies only to these people who are allowed to travel to the UK from red list countries.

But why not ban all incoming international travel? An ethically justified policy must be proportionate, weighing the benefit of preventing the spread of infectious disease against the harms caused. Despite the high transmission risk, preventing citizens from entering their own country would seem to be disproportionate because of the strength of the individual’s right to enter their own country. However, it would be proportionate to ban travellers who do not enjoy such strong rights to entry.

A mandatory hotel quarantine policy will not be 100% effective. It will depend on whether the person complies with the restrictions, the robustness of the hotel safety protocols, the length of the quarantine period, and the reliability of the tests used to determine when a person can be released. However, an effectively implemented quarantine will help to reduce the transmission risk of international travel, while respecting the right to entry.

Ethical questions remain, though, about how the policy ought to be implemented, such as, who should pay for the considerable cost of quarantine?

Some countries requiring incoming travellers to quarantine initially covered the cost. This was fair, in some sense. People who have to quarantine already need to bear a considerable non-financial cost in the interests of public health. The wider public are the primary beneficiaries of the quarantine – travellers are therefore being asked to pay to benefit other people.

Providing free quarantine also helps to ensure that all are equally able to exercise their right to enter their country. At present, the Philippine government still covers the cost of quarantine for Filipino workers returning from overseas.

But quarantine is expensive, and money spent on providing it cannot be spent on other pressing public health initiatives. As such, countries have increasingly chosen to pass on the cost to travellers, either in full or in systems of co-payment.

There may sometimes be ethical reasons for waiving the fee. Earlier in the pandemic, New Zealand’s housing minister, Megan Wood, said that it wasn’t fair for the taxpayer to pay for quarantine “if you’ve elected to go on holiday”. Yet countries may choose to waive the fee for those who have particularly strong reasons to travel.

New Zealand considers waiver applications, indicating that they may be granted for medical or compassionate reasons and financial hardship. Waiving the fee for those facing financial hardship is necessary to reduce unfair inequality in people’s ability to return to the country. This concern was voiced in response to the quarantine policy in Uganda.

It is also unfair to expect travellers to pay to re-enter their country when they could not have known that they would need to when they left. Again, in the New Zealand system, returning nationals will not be charged for entry if they left the country before the charges first came into place (on August 11) and if they are returning for more than 90 days.

It is not yet clear which exemptions the English policy will allow, or whether charges will apply regardless of when travellers left England. Mandatory hotel quarantine is probably ethically justified, but there are also strong ethical arguments to follow other countries in granting some exemptions to the hefty fee.

Image: "k." by Roberto.Trombetta is licensed under CC BY-NC 2.0