Question: Are Americans Really Against Wearing Masks to Stop Coronavirus? 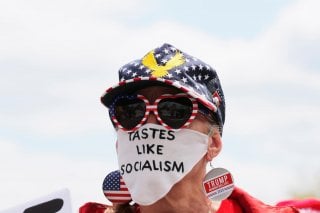 The controversy over face masks has been gaining steam as states start to reopen. Today, 12 states require people to wear a face covering. How have Americans reacted?

One of the earliest questions on masks appeared in a February 13-18 Kaiser Family Foundation poll in which fewer than one in 10 Americans (9 percent) reported buying or wearing a protective mask. That rose to 12 percent in their March poll. In the March survey, 16 percent of Democrats and 7 percent of Republicans said they had bought or worn a protective mask. The gaps were wider on other issues. In this battery, there was a 21-point gap between Republicans (28 percent) and Democrats (49 percent) when asked whether they had cancelled plans to attend large gatherings.

In five Economist/YouGov weekly surveys taken in March, the percentage saying they were wearing a mask rose from 9 percent to 19. In the earliest March poll, there was a four-point difference between Democrats and Republicans on wearing a mask; in their last March poll using this question, the difference was five points.

The public’s tepid early endorsement of masks isn’t surprising given evolving signals from federal health authorities. On February 29, the Surgeon General, Dr. Jerome Adams, tweeted that people should “STOP BUYING MASKS!” As concerns grew that the virus spread through the air, people scrambled to buy them, leaving a shortage for the nation’s frontline health care workers. In Kaiser’s late March poll, 88 percent were worried that health care workers would not have masks to protect themselves

The CDC did not provide clear guidelines about masks until April 3. That same day, the White House adopted the CDC’s recommendation that Americans should wear nonmedical cloth face coverings in public. The April 5-7 Economist/YouGov survey included several new questions about masks. In one, 79 percent approved of the CDC’s recommendation. Eighty-six percent of Democrats and 77 percent of Republicans approved. Fifty-five percent in the next question said they would wear a mask in public, with a 20-point gap between Republicans (47 percent) and Democrats (67 percent). While the partisan gap was large, there were other large gaps. There was a 30-point gap between the youngest and oldest respondents on wearing a mask.

The new guidelines produced another change in public opinion as Americans wrestled with the best way to protect themselves. Eighty-eight percent in a mid-March Gallup/Knight Foundation survey said proper and frequent hand-washing with soap was a more effective preventative measure for a healthy person against getting coronavirus than wearing a mask, while only 11 percent said wearing a mask was equally or more effective than hand-washing. After the CDC mask recommendation, the percentage reporting that hand-washing was more effective than mask-wearing dropped 20 points to 68 percent in their April 14-20 survey. At the same time, 32 percent said that masks were equally, if not more, effective than hand-washing — a 21 point increase.

Growing faith in the efficacy of masks is translating into more widespread use. In Morning Consult online polls of registered voters, the share of voters saying wearing masks is effective has risen sharply in their weekly polls since early March, and the differences between Republicans and Democrats are modest. In fact, majorities of voters from both parties say masks are effective in preventing the spread of coronavirus (85 percent of Democrats and 74 percent of Republicans).

Some of the sharpest differences appear on questions that trigger partisan reactions, especially on questions about the president. In Quinnipiac’s late May survey of registered voters, two-thirds said President Trump, who has usually declined to wear a mask, should wear one. Twenty-seven percent said he should not. Thirty-eight percent of Republicans and 90 percent of Democrats said the president should wear a mask in public. In a mid-May Kaiser Family Foundation poll, the partisan divide in opinions about whether the president should wear a mask was largely driven by Republican men, who generally support the president. Forty-three percent of Republican men said Trump should wear a protective mask, while majorities of Republican women (53 percent), Democratic women (92 percent) and Democratic men (83 percent) said he should. Republican men also reported lower rates of wearing masks at least most of the time when they leave the house (49 percent) compared to every other combination of party ID and gender.

The Quinnipiac University poll also asked whether mask usage should be “required,” revealing a deep cleavage between Democrats and Republicans, with 87 percent of Democratic registered voters saying masks should be required. Forty percent of Republicans gave that response. Republicans are typically more resistant to government mandates than Democrats.

As states open up and people return to society, the debate over wearing face masks will continue. Public opinion on masks has evolved in recent months, bringing with it some familiar partisan difference.

This article by Karlyn Bowman first appeared in AEIdeas on June 2, 2020.