This Racist Political Cartoon of Kamala Harris Appeared in Australia 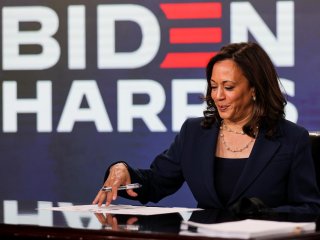 Several Australian politicians, including former Prime Minister Kevin Rudd, have described the cartoon as racist, as have a suite of journalists and media observers (ex-Labor leader Mark Latham said he loved it).

I am firmly in the camp that thinks this is a racist and sexist cartoon. As a journalism lecturer with an ongoing interest in the diversity of Australian media, I think today’s outrage shows there is still much work ahead in making newsrooms less overwhelmingly white.

My own view is this cartoon should never have been published, and it has no place in Australian media. I’m glad to see Australian politicians and public figures coming forward and saying it’s unacceptable.

The Australian’s editor-in-chief, Chris Dore, told Guardian Australia that Leak’s cartoon “was quoting Biden’s words” from a tweet the US politician issued this week about young girls drawing inspiration from Harris.

“When Johannes used those words, expressed in a tweet by Biden yesterday, he was highlighting Biden’s language and apparent attitudes, not his own,” Dore told Guardian Australia. “The intention of the commentary in the cartoon was to ridicule racism, not perpetuate it.”

I think Dore’s explanation is unconvincing. Biden’s tweet is clearly referring to girls who look up to Harris. It’s a massive sidestep to say Biden is talking down to his recent vice-presidential pick. The contexts are totally different.

I cannot imagine The Australian published today’s cartoon without knowing it would provoke outrage - and that this outrage would delight parts of their audience. Part of the delight is in the outrage it provokes.

It’s hardly the first time, either, that a racist cartoon published in our mainstream media makes us look backward and out of step as a country.

Think back to the embarrassing episode of blackface on Hey Hey It’s Saturday in 2009, or Johannes Leak’s father Bill’s cartoons in the past, and the Herald Sun’s widely condemned Mark Knight cartoon depiction of Serena Williams in 2018. (It should be noted, the Press Council ruled the latter “non-racist” and Knight defended it - unconvincingly - by saying he had “absolutely no knowledge” of the Jim Crow-era cartoons of African-Americans.)

These examples show the work of making sure Australian newsrooms are diverse is ongoing.

There’s still so much room for improvement when it comes to editorial decisions, reporting and making sure we have a range of stories told about who we are as a country. That hasn’t been done well so far in Australia and cannot be done well while the media is largely dominated by white men.

As I wrote in an earlier Conversation article, despite a quarter of Australians being born overseas and nearly half having at least one parent who was born overseas, our media organisations remain blindingly white.

A 2016 PriceWaterhouseCoopers report found 82.7% of Australia’s media workers speak just one language, and speak only English at home. There’s a high prevalence of media workers in the inner Sydney suburbs, it found, concluding that a lack of diversity – in ethnicity, gender and age – is holding back industry growth.

Unless these trends are addressed, we will continue to see work like Leak’s cartoon making it through the gate.

There’s a long history of racist cartoons in Australian media. What’s different is the response. Today’s cartoon has blown up on Twitter — and yes, I realise it is a place closely watched by Australian politicians and media people but largely ignored by most Australians — but at least the online outcry allows some kind of accountability.

In the past, the media could publish racist cartoons without being called to account. These days, the pushback is manifesting in real time.

Should we all have just shaken our heads and ignored it? I don’t think so. Once something like that is published, the horse has bolted and you have to respond. I think collectively ignoring a racist cartoon won’t remove its prominence or significance.

We are forced to revisit this debate every time a racist cartoon or article is published, or a racist comment put to air. I hope that by revisiting it forcefully enough and by making these points enough times, the conversation moves forward and we can make some progress. I also hope racist cartoons are never published in Australia’s mainstream media again. But I won’t be holding my breath.