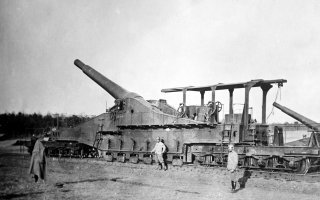 Here's What You Need to Know: Both the South and the North employed heavy railway guns during the war.

The most famous—even infamous—examples of large artillery pieces mounted on railway cars occurred during the Second World War, when Germany employed these gigantic weapons in the sieges of Leningrad and Sevastopol. During the latter siege, the Germans had to build a special railway spur along with four semi-circular tracks for the gun’s car to transverse, while it took twenty-five cars stretching nearly a mile to transport the Schwerer Gustav to the Crimea.

A crew of 250 was also required to assemble the gun over the course of three days, but another 2,500 men to lay track and dig the embankments for the super-weapon. Yet, over the course of a month, the artillery gun—with its thirty-one-inch caliber barrel—leveled the defenses at Sevastopol, allowing the city to be captured.

Such a weapon was not new to the Second World War however, and its origin dates back nearly eighty years to the American Civil War. Between 1861 and 1865 both Confederate and Federal forces employed locomotives with rolling stock for tactical weapons. Sometimes dubbed “ironclads on rails,” the heavy guns were used with great success to take out enemy fortifications.

The Confederates were the first to deploy a railroad gun in combat—a thirty-two-pounder Brooke Naval Rifle that was mounted on a flatcar and protected by a sloping casemate of railroad iron. It was described as looking like a land version of the ironclad CSS Virginia and was first used in artillery duels at the Battle of Fair Oaks in June 1862 and was used a month later during the Battle of Savage’s Station to stop the Union advance on Richmond.

Among the most successful was the thirteen-inch mortar named “Dictator.” Mounted on eight rail wheels, the Union forces used it during the Siege of Petersburg in 1864, but its recoil was so strong that the very first time it was fired, the recoil destroyed the flatcar. After being mounted on a new flatcar that was reinforced with additional beams and covered with iron plate allowed it to resist recoil damage from the full charge. It was able to silence Confederate guns and prevented the counter bombardment of the Union line. The mortar could lob a 200-pound explosive shells about two and a half miles, a considerable distance for the era.

It was positioned on a curved section of the Petersburg & City Point Railroad and was employed for about three months during the siege. It was operated by Company G of the 1st Connecticut Heavy Artillery.

While the railway cars actual contribution to the outcome of the American Civil War may have been limited, these have been seen as the conceptual ancestors to tanks, infantry fighting vehicles and self-propelled artillery.