A Real European Army is Still a Long Ways Off 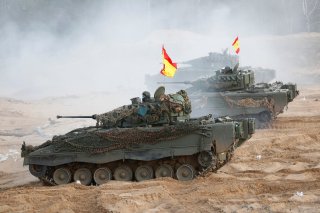 Key Point: Combat against a large, high-tech opponent like Russia, even in a limited conflict such as a Russian invasion of the Baltic States, would require divisions and brigades supported by all the specialized systems that a modern army needs: air cover, air transport, electronic warfare, reconnaissance systems, and more.

Charles de Gaulle famously asked about France: "How can anyone govern a nation that has 246 different kinds of cheese?"

War -- or at least war waged efficiently -- is not a consultative process. The World War II alliance between America and Britain -- as close a military embrace as ever existed -- was still riven by major disagreements over strategy. One reason that NATO has lasted 70 years is because it never had to do very much other than deter the Soviets, conduct a few small operations in the Balkans and Mediterranean, and send a few troops to support the U.S. in Afghanistan. Imagine if the U.S. had tried to push NATO into intervening in the Vietnam War.