Real Life Super Soldiers? They Could Be on the Horizon 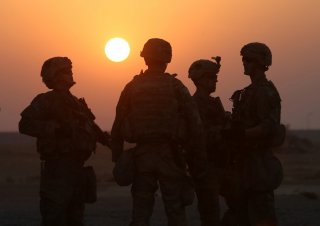 While Captain America was first introduced to audiences way back in March of 1941, the Marvel Cinematic Universe’s depiction of the scrawny kid turned brawny hero in Captain America: The First Avenger brought the concept out of the ’40s and into the modern consciousness. Since then, there’s been no shortage of articles comparing the titular hero to ongoing efforts to pull the best possible performance out of the human form, but how practical are these efforts really? It turns out, they’re increasingly practical–and that may be bad news for the United States.

Of course, it’s important to remember that not every scientific effort to improve human performance is inherently related to the military. While Captain America benefitted from defense research in his own transition into the peak of human capability, today’s pharmaceutical conglomerates and university-backed researchers are making significant strides toward improving human performance in the private sector. In a truly all-encompassing “super soldier” effort, the research, treatments, and even body modifications found in these other endeavors would almost certainly play a vital role–and to be clear, that’s the way the Pentagon would probably prefer.

In recent years, the Defense Department has placed an increased emphasis on leveraging “off the shelf” technology that’s already been developed in the private sector. This approach offers massive cost-savings over the traditional method of soliciting proposals and awarding contracts for research and development, as well as a vastly expedited delivery. The more off-the-shelf components a new defense program leverages, the faster it can go from theory to fruition. This mindset works for rifles and night-vision goggles, but could also feasibly work for the sort of medical treatments and technologies the Pentagon would need to successfully start fielding super soldiers.

So, let’s take a look at some defense and private sector programs that could very feasibly help usher in the age of super heroes (as we know them) on the battlefield. As you’ll come to appreciate, the question may not be whether or not we can make a super soldier… but rather, whether or not we should. And it’s amid that swirling ethical and moral conundrum that we find America’s vulnerability on that front.

The most troubling part of that realization isn’t understanding that America will likely have to grapple with the ethical implications of these endeavors in the near future. Rather, our real concerns should come from the near-certainty that some of America’s state-level opponents harbor no such misgivings, and as a result, will likely beat us to the super-soldier punch.

The human body was designed for a pretty rigorous lifestyle, but an engineering design for a not-too-distant artificial red blood cell could very literally give future super-soldiers a significant leg up over the competition. These artificial red blood cells, called respirocytes, would give their users the ability to hold their breath for extended periods of time and offer a massive jump in cardiovascular endurance.

Being able to hold your breath for hours would obviously come in handy for Special Operators approaching from the shore, and the added endurance offered by these super-cells would come in handy in just about every combat environment on the planet. With tensions on the rise in the high altitudes of the Himilayas, respirocytes could let soldiers operate in the thin air of high altitudes just like they would down at sea level.

The same premise of supercharging your red blood cells is already a common cheat among some athletes who participate in “blood doping,” which involves drawing your blood, separating the red blood cells, waiting for your body to replenish its shortage, and then re-injecting those red blood cells into your body. The surplus of red blood cells then helps carry more oxygen from your lungs to the rest of your body, which offers improved endurance.

Night vision could be injected straight into your eyes

Today, American service members in theater often operate using night-vision goggles (NVGs), but these systems offer some real drawbacks. The standard NVGs issues to troops on the ground offer very little peripheral vision and even less depth perception, making them tough to adjust to and increasing the risk of dangerous operations like driving at speed or engaging opponents under fire. Special Operations units often have better night vision options, but with civilian equivalents recently hitting the market at around $40,000 per pair, these more capable goggles are too cost-prohibitive for broad distribution… but what if we didn’t need them anymore?

In a recent study from the University of Massachusetts Medical School in Worcester, MA, mice were trained to navigate a maze by following triangular signs they’d come across along their way. Then, with the lights off, they’d let the mice try again with exactly the results you’d expect: They couldn’t find their way in the dark. Then, scientists injected mice with nanoparticles that convert infrared light to visible light directly into their eyeballs. The result was a newfound ability to see in the dark that lasted for around 10 weeks and seemed to offer no negative side effects.

“I definitely think it will work in humans,” Xue Tian, a Hefei-based vision physiology expert, said in Science magazine.

Turning thoughts into firepower on the battlefield

For all of Captain America’s talents, he’s never managed to pull off reading minds or telekinesis, but these sorts of skills may become standard issue in the years ahead. A decade ago, DARPA (the Defense Advanced Research Projects Agency) was already experimenting with helmets that would allow for “silent talk.” The goal was to read a user’s pre-speech brainwaves and convert them into transmittable data. The recipient’s system would receive and translate that data into audible or visual cues in the recipient’s headset.

This would allow soldiers on the battlefield to communicate while maintaining total silence, but the uses for this sort of tech extend well beyond whispering secrets into your squad leader’s ear. In 2018, DARPA announced that an individual equipped with their experimental brain-computer interface had successfully controlled a constellation of three different types of simulated aircraft simultaneously with her mind.

This sort of tech could lead to fighter pilots who can control their AI-equipped drone wingmen from programs like the Air Force’s Skyborg or Boeing’s Loyal Wingman programs seamlessly through thought. In the future, the same tech could be leveraged for other drone and semi-autonomous air, sea, and ground platforms — allowing our war fighters to bring their own heavy reinforcements with them, or even to control robotic exoskeletons they wear into the fight.

Of course, the most important facet of Captain America’s super soldier serum was its ability to transform him physically from a an underweight weakling into a heavyweight champ, but just how feasible is that?

Steroids and other performance-enhancing drugs have been around for some time, and let there be no mistake, there have already been instances of these sorts of drugs being used for military applications. However, using anabolic steroids requires a carefully controlled treatment plan that includes medications that can offset your body’s own efforts to produce higher levels of estrogen in order to offset the added testosterone in your system. Failing to adequately manage hormones can lead to serious health issues, including the sorts we all grew up hearing about among needle-pushing bodybuilders.

Hopping on a cycle of steroids you buy from a shady guy behind Gold’s Gym isn’t the only way to manage a body’s hormones or general makeup, however. According to E. Paul Zehr, the director for the Centre for Biomedical Research at the University of Victoria, hormone and gene therapies that are already used to treat, cure, or supplement patients could eventually be leveraged to turn an ordinary soldier into something a bit more super.

“The basic idea is to say, what if we take all those same techniques and apply them in folks who didn’t have any so-called deficits, or weren’t needing any rehabilitation or any reconstruction, but instead pushed them to a different level of performance?” Zehr asked CBC.

Zehr posits that similar treatments could be used to push a person’s physical capabilities to the outside limits of human potential. He cites practices found in livestock, like removing myostatin genes from Belgian Blue Cattle to allow them to develop massive amounts of muscle, as a practical demonstration of what could be done to human subjects. He believes that combining these treatments with a clinically developed training regimen could result in human beings that are as much as 30% stronger than the strongest gym-rat in your squad bay.