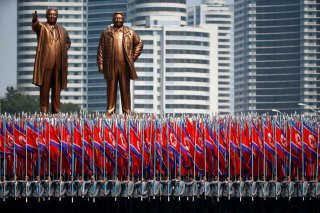 Here’s What You Need to Remember: ROK forces must also be prepared to provide humanitarian assistance and emergency relief. The U.S. can assist by providing advisory support to build capacity in disaster relief delivery and crisis planning. The U.S. should encourage the ROK government and private sector to build greater stockpiles of portable water, medical supplies, food rations and temporary shelters that the military can reach upon for immediate distribution.

Speculation on the eventuality of a North Korean government collapse has fueled analysts and policymakers for years. From the famine and economic crisis in the 1990s to recent political purges within the Kim Jong-un government, the potential for collapse always seems to be around the corner. Regardless of how changes take place on the peninsula, North Korea’s entrenched security structures, humanitarian complexities and depleted infrastructure will induce significant instability challenges for regional actors. As calls to support unification and prepare for contingency of an unexpected collapse continue, it is an opportune time for U.S. forces, located on the Korean peninsula, to help the ROK (Republic of Korea) military prepare for stabilization and humanitarian relief efforts.

The ROK military has roughly 500,000 active-duty troops and can activate hundreds of thousands of reserve soldiers. This additional manpower forms Stabilization units that mobilize in support of the active-duty troops and homeland defense. However, ROK Stabilization units consist mostly of reservists with limited combat and stability training with which to manage and mitigate against potential drivers of instability. To effectively plan and prepare for instability, U.S. forces should establish training opportunities in which both ROK reservists and active-duty military attend in either peacetime or in conflict conditions to exercise the skills and training needed.

Another opportunity U.S. forces should consider is developing a rapid deployment academy for mobilized stabilization divisions preparing to engage in a collapse or conflict environment. U.S. forces could add on to the ROK units’ pre-deployment training to encourage a greater emphasis on stability operations and civil affairs, building off the U.S. operational experience from recent campaigns. This military-to-military engagement gives the U.S. forces on the peninsula a significant training opportunity to build the capacity of their ROK counterparts.