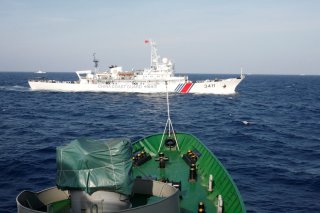 Since its October release in draft form, China’s new coastguard law has been the subject of dozens of news reports and analyses. Maritime law enforcement legislation rarely attracts such international attention, but in this case it is warranted. For 15 years, the China Coast Guard has led the country’s seaward expansion into areas long claimed but seldom (if ever) visited. International observers are right to wonder, what does the new law portend for Chinese behaviour at sea?

Many have focused on the law’s use-of-force provisions. In the past, the China Coast Guard has employed a wide range of coercive tactics to achieve Beijing’s strategic and operational objectives. Last April, for instance, a 3,500-ton Chinese coastguard ship rammed and sank a Vietnamese fishing vessel operating in waters also claimed by Hanoi (Beijing implausibly suggested the wooden-hulled Vietnamese boat did the ramming). However, to date it has avoided using armed force against foreigners.

The new law signals that that could change. Article 47 authorises armed China Coast Guard personnel to forcibly board noncompliant foreign vessels ‘illegally’ engaged in economic activities in Chinese-claimed waters. Article 48 allows the use of shipborne weapons (that is, deck guns) in cases where coastguard forces face attack by weapons and ‘other dangerous methods’—which could mean anything. Even more ambiguous, Article 22 allows the coastguard to employ ‘all means necessary including the use of force’ to stop foreigners found infringing Chinese ‘sovereignty, sovereign rights and jurisdictional rights.’

While disturbing, the use-of-force provisions are not the most worrisome elements in the new law. Rather, it is the ambiguous geographic scope of the law’s application: China’s ‘jurisdictional waters’ (管辖海域). The draft law only vaguely defined the term (Article 74). In the final version, passed on 22 January, that content was removed, leaving no definition at all.

However, a close reading of authoritative Chinese sources reveals that Beijing claims jurisdiction over 3 million square kilometres of maritime space, often called China’s ‘blue national territory’. This comprises the Bohai Gulf; a large section of the Yellow Sea; the East China Sea as far east as the Okinawa Trough, including waters around the disputed Senkaku/Diaoyu Islands; and all the waters within the ‘nine-dash line’ in the South China Sea. By Beijing’s own reckoning, ‘over half’ of this space is contested by other countries.

If the China Coast Guard followed the letter of the new law, what would we see? In the South China Sea, any foreign fishing, survey or research vessel found operating anywhere within the nine-dash line would be subject to boarding and inspection (Article 18). Refusal to comply would mean a forcible boarding by armed personnel prepared to compel them to do so (Article 47). The China Coast Guard would send units to dismantle the structures on every Vietnamese-, Philippine- and Malaysian-occupied land feature in the Spratly Archipelago (Article 20). In the East China Sea, the coastguard would sail to the Senkaku/Diaoyu Islands and ‘expel’ every Japanese ship it encountered (Article 17). In the Yellow Sea, East China Sea and South China Sea, the coastguard would track down and evict US Navy ocean surveillance ships like USNS Impeccable and hydrographic survey ships like USNS Bowditch for conducting ‘illegal’ activities in China’s exclusive economic zone (Article 21).

Fortunately, just because Beijing has a law on the books doesn’t mean that it will actually enforce its provisions. This is certainly true in the maritime realm. For example, China’s national fisheries law, last updated in 2013, authorises China’s maritime law enforcement forces to punish and expel (Article 46) foreign fishing vessels operating illegally in China’s jurisdictional waters. Yet there remain vast sections of China’s ‘blue national territory’ where they continue to operate unmolested.

In recent years, China has adopted several new laws and regulations that seemed to presage new coercive behaviour that never occurred. For example, in 2012 and 2013 Hainan province issued two new maritime laws, one on fisheries management and one on public security. Nether has apparently made things worse for foreign mariners, despite concerns they would.

In August 2016, the Chinese supreme court issued judicial interpretations authorising the China Coast Guard to charge foreigners for criminal offences if caught ‘poaching’ in Chinese jurisdictional waters. Since then, the coastguard has not enforced this provision, despite many chances to do so. Thus, new laws have not necessarily meant new coercive behaviour. It seems unlikely that this one will either.

Why? Because enforcing these laws against foreign mariners is above all a political decision. It is a question of foreign policy, not domestic policy. And applying them by the book would be terrible foreign policy. Beijing would further alienate its neighbours, pushing them closer to its rivals, the US and Japan. It would make it much harder for Malaysia, Indonesia and Vietnam to remain neutral in the current period of great-power competition. It would risk erasing all the hard work done to lure Manila away from its alliance with Washington. And it would mean war with Japan and the United States.

This doesn’t mean that regional states should simply ignore the coastguard law. Far from it. When the draft was issued in October, an official ‘explanation’ listed four reasons why it was urgently needed. The first cited requirements associated with building China into a ‘maritime great power’ and ‘safeguarding maritime rights and interest’—the code words for ‘do a better job defending China’s maritime claims’.

Clearly, Beijing expects the law to benefit its cause in some way. Moreover, Chinese policymakers inserted the most coercive provisions in the new law because they clearly imagined situations when applying them would make political sense. So, even if the chances of a major new provocation are small today, regional states must take substantive steps to prepare for that possibility in the future.

Smart leaders will do more than that. In June 2012, Vietnam passed a new maritime law that defined the geographic extent of its own maritime boundaries, including territories occupied by China. In retaliation, China established Sansha City, opening the door to major expansion of Chinese administration of disputed space in the South China Sea. If China can take foreign legislation seriously, so can others.

Aside from being vigilant and shrewd, what else might regional states do? At the very least, they should tell Beijing that they will never accept the law’s application against their citizens in disputed waters and warn of severe consequences if China does so anyway. In the age of great-power competition even small states have leverage. They should also demand that China provide a precise definition of its ‘jurisdictional waters’.

In authorising its coastguard to use deadly force to uphold its maritime claims, Beijing has crossed a line. Foreign diplomats should tell their Chinese counterparts that ambiguity of any kind is simply no longer acceptable.