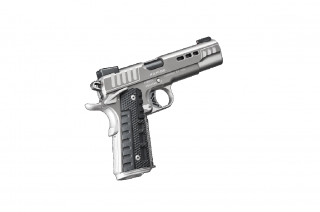 With a slew of new guns revealed several months ago at the 2019 National Association of Sporting Goods Wholesalers (NASGW) Expo and the SHOT 2020 show right around the corner, it’s an exciting time of year for firearms enthusiasts.

Here are five of the most interesting and hotly anticipated coming in 2020:

With the release of the Taurus’ Raging Hunter, which won the NRA American Hunter’s 2019 Hunting Handgun of the Year award, hunters looking to try something radically different from the typical sporting rifle o shotgun were treated to a best-in-class revolver option. Heritage Manufacturing Inc. has since come out with a unique small-game hunting solution of its own, albeit one that draws inspiration from the past: the Rough Rider Rancher Rimfire 22LR, a beautiful carbine revolver that pays homage to the revolver carbines of the mid-19th century. Chambered in the popular .22LR round, the Rancher features a buckhorn sight system, steel frame, and walnut stock for a fairly competitive MSRP of just under $300.

(Note: This first appeared earlier in the year.)

Kimber’s 2020 lineup offers what may be their most sophisticated 1911-style pistol to date: the RAPIDE Black Ice series. Available in 9mm, 10mm, and .45 ACP options, and offered with the imposing KimPro II stainless steel finish (the .45 version comes with a matte black finish instead), customizable G10 grip, DLC coated barrel for added durability and V-cut aluminum trigger with a 4-5 pound pull. With a prodigious price tag of $1500, the RAPIDE is marketed toward shooting competition contestants seeking a high-end 1911 pistol that performs optimally out of the box.

Sig Sauer’s first bolt-action precision rifle is marketed as a best-in-class option for big-game hunters and dedicated competition shooters, combining the lightweight and portability of a hunting rifle with the extreme accuracy of a competition rifle. A three-lug bolt design and one-piece aluminum receiver offer competition-level accuracy, while the incorporation of a skeletonized, adjustable stock and polymer grip helps the CROSS rifle achieve the distinction of lightest rifle in its class at an impressive 6.5 lbs. As with all of Sig Sauer’s flagship products, the CROSS rifle comes in a cornucopia of variants that reflect a choice of barrel size-- 18 and 16 inches-- and three round types: 6.5 Creedmoor, 308 Win, and SIG’s in-house .277 Fury. None of them are cheap, however, with an elite MSRP of $1,779 to reflect the rifle’s elite intended purpose.

Capitalizing on the non-NFA 12-gauge shotgun (shotguns that are not subject to the National Firearms Act) craze of 2019, Black Ares Tactical has announced a new line of Lever Action 12-gauge shotguns with an included shorty grip. The Pro Series Lever Action line offers the typical features of a midrange sporting or tactical shotgun with an 18.5 barrel and 6+1 capacity but at a fraction of the typical cost. Aggressively priced at an MSRP of $399 to $469, Black Ares is set to introduce the 12 gauge shotgun format to a wider audience than ever before.

Curio hunters will appreciate this miniature-but-fully-functioning, .22lr round, 20-inch barrel version of the classic Russian-Soviet Mosin-Nagant 91/30 rifle, the first in Keystone Sporting Arms’ series of five miniaturized WWI and WWII rifles. Collectors will be especially interested in the limited edition version, which ships in a wooden, Eastern Front-style crate with matching serial numbers. This crate bundle is available for $499 while supplies last, while the standalone rifle costs $399.

Mark Episkopos is a frequent contributor to The National Interest and serves as a research assistant at the Center for the National Interest. Mark is also a PhD student in History at American University. This article was first published in December 2019.