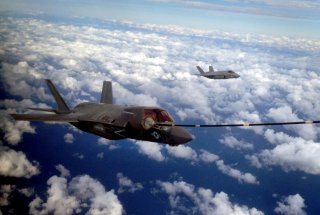 A United States Marine Corps F-35B crashed at approximately 4 p.m. PST on Tuesday after a mid-air collision with a KC-130J tanker aircraft during refueling. The pilot of the F-35B was able to eject from the aircraft and is currently being treated for injuries, according to a Marine Corps press release. The KC-130 made an emergency landing near Thermal Airport in Riverside County.

Based on images that have reached social media, it appears that the KC-130 involved in the mishap didn’t actually reach Thermal airport but rather landed in the nearby vicinity. All eight members of the crew have been accounted for and were reported safe by Marine Corps officials.

According to officials, an investigation into the cause of the crash is already underway.

Despite being common, air-to-air refueling remains among the most dangerous activities pilots contend with. In December of 2018, a U.S. Marine Corps F/A-18 Hornet collided with a KC-130 refueling tanker off the coast of Japan, killing six of the seven Marines aboard the two aircraft.

The F-35B is the Marine Corps’ short take-off, vertical landing variant of the famed Joint Strike Fighter. On Wednesday, video surfaced online of the F-35 colliding with the ground after the pilot safely ejected. Fortunately, none of the bystanders nearby were injured in the crash.