Refugees Are at Increased Risk of Coronavirus 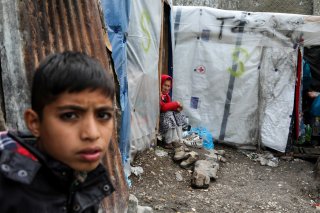 Despite the coronavirus pandemic, wars and conflicts have not stopped. While some countries have successfully grappled with the virus, in refugee camps the situation remains fraught.

Researching the social epidemiology of zoonotic disease risks in displacement and international human rights law, we have seen firsthand the intersection between health and human rights. Susceptibility to zoonoses — diseases transmitted between animals and humans — is influenced by complex biological, environmental, socio-economical, political and technological processes. For the sake of global health, it is therefore important to ensure that people made marginalized have access to robust services, including health care.

Conflict and disease transmission are often linked. For example, research has found that the collapse of health systems and disease control in Syria led to an increase in leishmaniasis, rabies and tuberculosis, including in refugee populations. When polio re-emerged due to a decline in vaccination rates, neighbouring countries rapidly responded.

Two months ago, one of us returned from fieldwork in Jordan, studying the risks of zoonotic disease transmission among Syrian refugees, just before the country closed its borders. These concerns have become increasingly pressing as COVID-19 pushed humanitarian workers to mitigate the potentially devastating effects of the pandemic on refugees and migrants in incredibly challenging conditions.

The risk of infection in refugee camps

The risk posed by infectious diseases among vulnerable populations depends on a range of factors with political and socio-economic factors playing an important role. Poverty and inequality both influence the occurrence and severity of the disease. In refugee settings, these risks are exacerbated by overcrowding and unhygienic living conditions, while interpersonal relations within households and communities further impact risks of infection.

Besides facing overpopulation, refugees often tend to have lower immunity levels due to limited quantities and quality of food, water, medical provisions and pre-existing conditions such as respiratory and gastrointestinal infections.

Unfortunately, the most effective responses to COVID-19 such as testing, social distancing and quarantine are nearly impossible to implement in many displaced populations due to overpopulation of camps and shelters and inadequate access to resources. In refugee camps, where families often share washing and sanitation facilities, disease control is difficult.

Lockdowns and reduced access of health-care workers to regions with widespread poverty, in combination with a scarcity of essential supplies, are likely to exacerbate poor health. The United Nations High Commissioner on Refugees (UNHCR) warned of the challenges the organization faces in getting supplies to refugees from their network of regional stockpiled warehouses due to a lack of transportation.

Worsening living conditions amid a pandemic

In early April, the first cases of the novel coronavirus were confirmed in a Greek refugee camp on Lesbos, which has hosted hundreds of thousands of refugees since the start of the war in Syria.

In early 2020, Lesbos saw an increase of hundreds of refugee arrivals a day. The refugees who remain stranded on the Greek island have strained relations with local residents, resulting in violence targeted at sites planned for new or expanded facilities and the departure of NGOs that provided essential food and medical services. These worsening living conditions in the camps and informal tented settlements greatly increase the risk of this population to COVID-19 infection.

As the number of refugees increases, their protection against disease can only be safeguarded through resettlement into better living conditions and robust asylum procedures that protect human rights. However, the two UN agencies mandated to resettle refugees and migrants, UNHCR and the International Organization for Migration, stopped all resettlement travel indefinitely. Such measures are in direct contravention of the UNHCR’s own international standards. Furthermore, there is limited evidence of the effectiveness of travel bans in pandemic disease control.

Thousands of refugees will die if they remain in camps with no means of accessing vital health care.

Political choices and people made vulnerable

Migration and the global response are always political exercises. People on the move have long been seen as harbingers of disease that must be stopped at all costs. Xenophobia and racism is already rampant as the world looks for scapegoats for the current outbreak.

While local initiatives such as homemade masks and COVID-19 helplines are stopgaps, we need a coordinated global response that strengthens universal access to health care including for people crossing borders and claiming asylum.

Refugee camps are full of contradictions: they hold so much pain, yet also showcase the resiliency and complexity of the human spirit. By their very nature, they are a bridge between belonging and uncertainty, locking people in time and space.

The conditions in camps make people vulnerable and exacerbate global health emergencies like the ongoing coronavirus pandemic. Our response to the intersection between migration, the coronavirus and systemic barriers to health will determine how and when we get a grip of this disease, a decision which will eventually affect all of us.

Dorien Braam is a PhD Gates Scholar with the Disease Dynamics Unit at the Department of Veterinary Medicine, University of Cambridge. Petra Molnar is an Adjunct Professor and Acting Director of the International Human Rights Program, Faculty of Law, University of Toronto.