Reminder: France Also Has an Aircraft Carrier (And Its Still Quite Formidable) 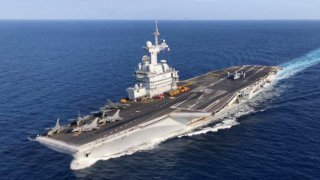 Here's What You Need to Remember: It is unlikely that the French government will want to go without a naval aviation capability as CdG nears retirement. Charles de Gaulle has served effectively in keeping France a viable, even necessary presence in the Western multilateral intervention scene. Notwithstanding changes in technology that make the environment more dangerous for carriers, it is very likely that France will construct at least one replacement carrier, thus maintaining her naval aviation tradition for another half-century.

France also has a trio of assault carriers, the Mistral-class ships Mistral, Tonnerre, and Dixmude. At 20,000 tons, the Mistrals can carry around thirty helicopters of various types. During operations off Libya, the Mistrals were pushed into a strike role, serving as platforms for attack helicopters conducting attacks against Libyan government positions.

France canceled a second carrier, based on the design of the British Queen Elizabeth–class ships, in 2013. France and the United Kingdom differed over propulsion, and the French are unlikely in any case to have settled for a ski-jump carrier. However, the cancellation of the second ship violates a cardinal rule of carrier acquisition, as France is effectively without a significant proportion of its naval power every time CDG enters refit. Indeed, at the moment, the carrier has been in refit since February 2017.