Revealed: Why The Air Force Is So Confident In The F-35 Stealth Fighter 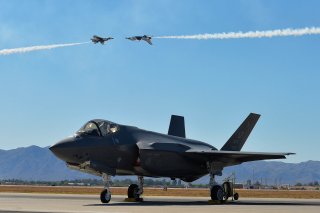 As a high-visibility, expensive acquisition program, the F-35 has many vocal detractors and advocates; the aircraft has, to be sure, had its share of developmental problems over the years. some of these problems include complications with its main computer system, called ALIS, and a now-corrected engine fire aboard the aircraft. Overall, most critics have pointed to the program's growing costs, something program officials claim has vastly improved through various money-saving initiatives and bulk-buys.

Kris Osborn became the Managing Editor of Scout Warrior in August of 2015. His role with Scout.com includes managing content on the Scout Warrior site and generating independently sourced original material. Scout Warrior is aimed at providing engaging, substantial military-specific content covering a range of key areas such as weapons, emerging or next-generation technologies and issues of relevance to the military. Just prior to coming to Scout Warrior, Osborn served as an Associate Editor at the Military.com. Osborn previously served at the Pentagon as a Highly Qualified Expert with the Office of the Assistant Secretary of the Army - Acquisition, Logistics & Technology. Osborn has also worked as an anchor and on-air military specialist at CNN and CNN Headline News. This story originally appeared in Scout Warrior. (This first appeared in January 2017.)