Revered No More: The Statue of Slave-Trader Edward Colston Torn Down 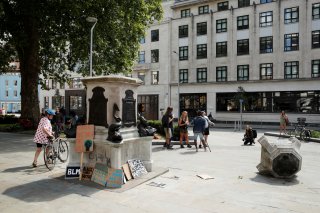 Opponents to the felling of the statue of Edward Colston argue that it was vandalism and represents an attempt to erase history. But the statue has its own peculiar story – and it is far removed from the Colston who lived from 1636-1721.

The statue was erected in 1895, more than 170 years after his death. Colston’s reputation was cemented and writ large over the 19th century of Bristol in south-west England because influential men in the city wanted to create a paternalist local idol.

Colston was a slave trader whose work as an official in the Royal African Company directly involved him in the enslavement of 84,000 Africans – 19,000 of whom died in the “middle passage” across the Atlantic. But the Victorian elite ignored this. For them, he was simply a philanthropist and a paternalist – a respectable figure.

The late-Victorian period saw a mass of statues going up across Europe in part of what the historian Eric Hobsbawm has called an “invention of tradition”. Figures were sought who embodied certain virtues. In Bristol, the Colston statue was part of a late-Victorian attempt to re-imagine the civic space around “great men” and “benign paternalism”.

A column entitled the “Talk of Bristol” in the Bristol Mercury remarked in 1895 on the continual moving of the statues within the harbourside. The statue of Edmund Burke, erected the previous year, had already been moved as the central avenue was being redesigned. St Augustine’s Bridge had just been built, and its designers wanted to give more prominence to Colston.

This transformation was closely tied to regional pride. Colston – a true Bristol son, born and bred in the city, and who made it his base for philanthropic works – was seen as particularly worthy of more prominent recognition.

The erection of the statue, and the adulation of Colston in this era, was all part of an ongoing attempt to obscure the role of Bristol in the transatlantic slave trade. As Madge Dresser, a Bristol University historian, has written, there is, or was, no trace of “his trafficking in human cargo” on the statue.

Colston appears as a merchant linked to the sea. The statue alludes to the dolphin who supposedly saved one of his ships by plugging a leak. The plaque on the statue insists that it was “erected by citizens of Bristol as a memorial of one of the most virtuous and wise sons of their city”.

The Western Daily Press used the occasion of the unveiling, November 13 1895, to exhort its readers to philanthropy. This was Colston’s birthday and became an annual “Colston Day”, which for the next six years was an official local holiday. For many, this was the greatest purpose of the statue, to encourage others to emulation. In the same article, the Press called for an art gallery to add to the dignity of Bristol.

Colston’s claim to being worthy of a statue rests on his philanthropic actions in donating to schools and churches as well as founding a boys’ school and almshouse. Colston Girls’ School was also founded in 1891 from the endowments of Colston. Nevertheless, as British academic Sally Morgan remarks, “his little kindnesses seem very little indeed”, especially when it is recognised that the boys school he founded was largely intended to supply sailors for his own ships. Colston’s philanthropy was not inconsiderable, but it was not as vast as is sometimes claimed.

The Colston societies, the Dolphin, Anchor and Grateful, which manage Colston’s legacies, were, in an investigation into the condition of the poor in Bristol in the 1880s, accused of using the money inefficiently due to its disorganised and arbitrary distribution.

This form of paternalist philanthropy was also increasingly seen as unsuited to the growing issue of the urban poor. The wave of strikes in Bristol in 1889-90 – and increasing socialist agitation for municipal intervention in living conditions – made aristocratic and independent philanthropy seem an inadequate solution. The investigation from the 1880s had already made clear that this philanthropy was insufficient to aid the expanding and restless population. The erection of the Colston statue can be seen as an attempt to reassert paternalism in the face of anxiety over working class unrest.

The notion that the erection of the statue in 1895 was part of popular support for his philanthropy, as the statue’s defenders claim, is hard to sustain. There were chronic struggles to find the £1,000 which was required for the statue. Some of this came from repeated appeals to the various Colston societies in Bristol, but the final amount was only reached after the statue had been unveiled.

It may be that the statue, coupled with the Burke statue of the previous year and the dedication of the cathedral window in 1890 to Colston, had stretched the generosity of donors. The original proponent of the statue and member of the Anchor society, J Arrowsmith, eventually paid for the remainder.

For some in the 19th century, Colston represented the respectability of great wealth and inequality, paternalism as a bastion against socialism, and private charity. The slavery on which his fortune was built was obscured for the purposes of a certain narrative of Bristolian history. The toppling and drowning of the statue is the assertion of a new reading of history.