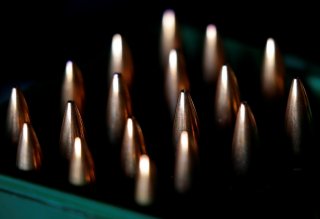 Here's What You Need To Remember: The Radically Invasive Projectile is an upgrade for standard handguns designed to make them more lethal without compromising other factors such as magazine capacity. The rounds frangible qualities make it dangerous to targets while decreasing the likelihood of the bullet striking innocents.

Kyle Mizokami is a defense and national security writer based in San Francisco who has appeared in the Diplomat, Foreign Policy, War is Boring and the Daily Beast. In 2009 he cofounded the defense and security blog Japan Security Watch. You can follow him on Twitter: @KyleMizokami. This article first appeared two years ago.