Robotic Combat Vehicles Are Coming to the U.S. Army 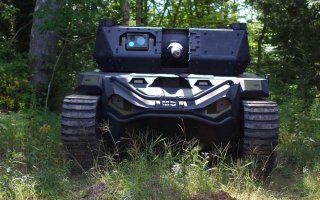 Here's What You Need to Know: Robotic technology and new applications of autonomy are developing fast.

In one recent instance, dismounted infantry helped reshape thinking about the Robotic Combat Vehicle-Light (RCV-Light) by engaging in what the Army calls “soldier touchpoint” exercises. The events are part of the assessment and development phase wherein promising new weapons and technologies are put in the hands of soldiers in combat scenarios for the purpose of simply testing what works and what does not in terms of how a new system should be used.

In the case of the RCV-Light, combat scenario assessments by soldiers operating the robot in warfare conditions wound up inspiring a shift in Army thinking about the optimal tactical uses for the ground drone. The robot, which is engineered for ever-expanding levels of autonomy, can either self-navigate in support of advancing infantry or be tethered to troops for specific mission functions.

“The original concept was that, you know, we put one of these in every infantry squad and they could drop their rucksacks and they could carry extra ammo, they could carry extra batteries, extra water. And when we put them in the hands of soldiers, they said, …. ‘yeah, that’s a good thought, General. But that’s not how we would use it. It’s way too noisy and doesn’t keep up with us,’” Gen. John Murray, Commander of Army Futures Command, told The National Interest in an interview.

As a result of the soldier input, Murray explained, the Army adjusted the fielding plan for the robot and has been working to reshape some of the maneuver tactics and formations in which it might prove most effective. Perhaps the small robot is best used as a forward surveillance node to conduct reconnaissance, scouting or terrain mapping for Army soldiers at safer stand-off ranges? Perhaps the robots are programmed with what are called “leader-follower” algorithms enabling an unmanned vehicle to follow precisely behind a manned vehicle going at a slower pace than fast-advancing ground soldiers to conduct rear surveillance or counter drone sensing? Maybe they could even be used as self-guiding weapons platforms moving well behind or well in front of fast-moving foot soldiers to fire upon enemy positions when directed by a human decision maker?

Regardless, robotic technology and new applications of autonomy are developing so quickly that the Army is taking specific steps to develop and refine the optimal Concepts of Operation for its new weapons and technology.

Murray called the soldier-inspired adjustment “one of the many examples of the good things that are coming out of getting our soldiers involved very early in the developmental process.”