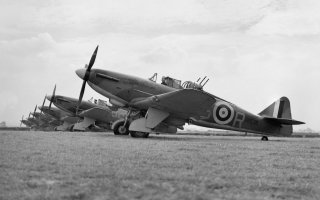 Here's What You Need to Know: The Defiant’s peculiar arrangement benefitted more from enemy misidentification than from the plane’s inherent abilities.

This two-man interceptor plane was designed to shoot the Luftwaffe out of the sky—with a turret in the fuselage.

This unusual fighter was designed as an interceptor aircraft for the Royal Air Force and drew upon lessons learned in the inter-war years. Aircraft designers were transitioning from single-engine biplane designs, to more aerodynamically refined and faster monoplane designs.

Bombers like the British workhorse Vickers Wellington were armed with their own defensive weapons placed into turrets. RAF planners assumed that bombers would not need a fighter escort, being able to defend themselves with their own guns. But, as these developments were being both implemented and realized by the RAF, the assumption was that other European countries, namely the German Luftwaffe, would also transition to well-armed bombers.

The Boulton Paul Defiant was designed to intercept anticipated heavy German bombers. A group of fighters armed with turrets behind the cockpit could, in theory, fly in groups underneath or to either side of enemy bomber groups and concentrating their fire, bringing bombers down.

In order to meet these specifications, Boulton Paul designed a fairly clean plane with a large four-barreled turret. In order to catch ever-faster enemy fighters, the Defiant opted for a hydraulically-powered turret with a manual backup, rather than a purely manually-powered version. In order to ease pilot responsibility, designers opted for a two-man pilot-gunner design.

Two .303 Browning machine guns were set into either side of the turret. The turret ring was blocked at the rear, preventing the guns from firing into the tail assembly, and was prevented from firing into the propeller blades. In case the gunner was hit, he could turn the turret forward, pointing at a 19 degree upward angle, and give fire control to the pilot.

Though the Defiant airframe was relatively clean, it suffered from the drag caused by the turret, with degraded performance, along with the additional weight from the turret and gunner. In case of an emergency, the turret was the more dangerous of the two seats to be in—entry and exit was only possible when the turret faced the side, and the small opening meant that most pilots couldn’t fit through the opening with a backpack-style parachute. Instead, they were given a bulky, but lower-profile full-body parachute suit.

The Boulton Paul Defiant was initially very successful against Luftwaffe fighter pilots. At the beginning of the Defiant’s service, the plane was mistaken for the similar-looking Hawker Hurricane. Thanks to this identification error, German pilots would attempt to bring down the Defiant from the rear, as the Hurricane had no rear-facing guns and was very vulnerable to attack. An attack from the rear played well to the Defiant’s turret guns, and Defiants scored a number of early successes against the Luftwaffe.

Once German pilots realized the Defiant/Hurricane identification error, the Defiant’s days were numbered. As a night fighter, the Defiant enjoyed some success when equipped with early onboard radar systems, but other, more capable fighters quickly replaced it.

Despite producing several Aces, the Defiant’s last role was as a target tug, pulling target gliders for RAF pilot target practice. Though the rotating turret design was successfully used by a number of bombers throughout the war, the Defiant’s peculiar arrangement benefitted more from enemy misidentification than from the plane’s inherent abilities.