The Royal Navy Adds More Missiles to Its Daring-Class Destroyers 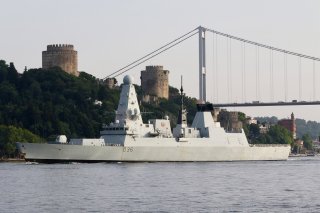 Here's What You Need to Remember: The Type 45 destroyers’ Aster 30 missiles will receive a refresh that was described by the Defence Ministry as a “tri-national sustainment and enhancement contract between the UK, France, and Italy.” The Aster 30 is a long-range area defense missile that is slated to stay in service throughout the life of the Type 45 destroyers.