For the Royal Navy, Laser Weapons Are Becoming Reality 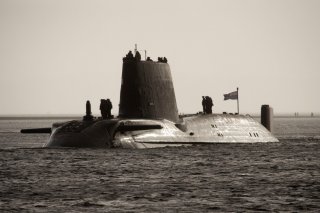 Here's What You Need to Remember: British defense officials told the BBC that “the demonstrator was not being developed to counter any specific threat, but to assess whether such weaponry could be delivered as a capability for the armed forces. But in general, directed energy weapons could potentially be used to destroy drone aircraft, missiles, mortars, roadside bombs and a host of other threats.”

The Royal Navy is moving forward with a laser cannon to arm its warships.

The goal is to demonstrate a laser weapon by 2019. To make that happen, the Ministry of Defense recently awarded a £30 million ($37.6 million) contract to a consortium of European defense firms.

British defense officials told the BBC that “the demonstrator was not being developed to counter any specific threat, but to assess whether such weaponry could be delivered as a capability for the armed forces. But in general, directed energy weapons could potentially be used to destroy drone aircraft, missiles, mortars, roadside bombs and a host of other threats.”

The British military's intention is to “have lasers operational by the army and navy by the mid-2020s and by the air force by the mid-2030s,” according to the Guardian.

“The MoD contract will see whether a laser can pick up and track targets at various ranges and in various weather conditions over land and water,” the Guardian reported. “The successful bidders are also being asked to assess the ‘dwell time’—how long a laser can stay in contact with a target—and how much power would be required for the lasers.”

The British may be taking their cue from the Americans. In 2014, the U.S. Navy deployed a prototype laser weapon on the USS Ponce, an amphibious transport stationed in the Persian Gulf. The Laser Weapon System, or LaWS, is designed to destroy drones or small boats.

Now the U.S. Navy is developing even more powerful laser cannon. Instead of the Ponce's thirty-kilowatt weapon, the Navy wants a 150-kilowatt cannon. The more powerful the laser beam, the shorter the dwell time that the laser must remain focused on the target.

The U.S. Army is working on its own laser weapons. The High Energy Mobile Laser Test Truck, or HELMTT, is a ten-kilowatt laser mounted on a Heavy Expanded Mobility Tactical Truck. The goal is to create a system mobile and rugged enough to be used on the battlefield (for a look at what HELMTT can do to a quadcopter, see the photo here). The Solid State Laser Testbed project is focused on a different question: how to maximize the damage a laser can inflict on a UAV, rocket or mortar shell.

Meanwhile, Russia also claims to be working on advanced directed-energy weapons, as does China. Just how well these weapons will work is another question. Laser beams are affected by smoke or bad weather. Cooling remains a problem, as does maintaining a sufficient electricity supply to feed the weapon.

“We are currently working with the DSTL [Defense Science & Technology Laboratory] to explore the role that electric flywheel technology, the kind used in Formula 1 racing, could play to generate and store the power required for high-energy weapons,” Adm. George Zambellas, Britain’s First Sea Lord, said in 2015.

However, the attractions of lasers are numerous, especially on a warship with a limited supply of ammunition. Laser cannon don’t run out of shells, and each shot is much cheaper than an interceptor missile. “Energy weapons don’t require conventional ammunition,” Zambellas said. “With a cost-per-shot potentially measured in pence rather than in pounds, they offer a route to address the spiraling costs of missile development and production.”

Michael Peck is a contributing writer for the National Interest. He can be found on Twitter and Facebook. This article first appeared last year and is being republished due to readers' interests.