The Royal Navy is Testing Jetpacks 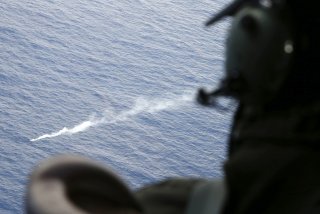 Here's What You Need To Remember: Jet packs have several key liabilities - they are difficult to control, and, more importantly, have an extremely short flight time due to fuel consumption. Browning's tests have made progress on these issues, but have not solved them.

It isn’t just Sir Elton John who might be known as the UK’s Rocketman if former Royal Marines Reservist and test pilot Richard Browning has anything to say about it. Browning has been conducting tests of his “Iron Man” styled Daedalus Mark 1 jet packs, which the Royal Navy believes could be used in future naval assault operations.

In a series of videos that were released by Browning’s tech start-up Gravity Industries last month, he could be seen conducting combat assaults while equipped with the Daedalus Mark 1. Those recent tests were conducted to determine if the Royal Marines could use the jet pack technology to rapidly swarm and board ships.

Browning could be seen in the videos taking off from PAC-24 Fast RIB (Rigid inflatable boat), steadying himself above the water and then literally flying to a P2000 Patrol Boat to simulate an “airborne assault.”

These were just the latest such tests conducted with the Royal Navy to determine whether and how jet packs could be used by the Royal Navy and Royal Marines in future operations.

In August 2019, Browning also took part in a number of tests with the UK’s senior service using his jet-powered Daedalus Mark 1 exoskeleton. In those exercises, Browning took off and landed from the patrol and training craft HMS Dasher (P280), while last year personnel from the 539 Assault Squadron 1 Assault Group Royal Marines (1AGRM) also tested jet pack technology to determine how it might be used in amphibious operations.

In last month’s test three Gravity Industries pilots took off from the RIB and then arrived by air on the Patrol Boat, highlighting that the suits could operate quite well on a large body of water while the pilots were able to take-off and land with relative ease from boats moving at speed, Navy Recognition reported.

Additionally, members of the 47 Commando Raiding Group of the Royal Marines took part in Future Commando Force exercises using multi-pilot launches from the RIB during the recent tests. Reportedly all of the past tests of the jet pack technology have been deemed a success.

While the concept of jet packs originated during the Cold War, the lack of control and short flight time have remained largely unresolved issues. Browning’s efforts have been addressing some—but not all of the issues.

The power of flight from the Daedalus Mark 1 is provided via five mini-jet engines, with two mounted on each arm and one in the actual backpack. This allows the pilot to achieve a vertical take-off while direction and speed are controlled via arm movements. The engines produce a reported 1,000 horsepower and can attain speeds of up to fifty kilometers per hour. The jet pack has a maximum ceiling of around 12,000 feet, and currently offers a flight time of approximately ten minutes, so while it wouldn’t allow a long-distance flight it could be enough for a short hop during hostage rescue operations.

A special helmet, which features a heads-up display (HUD) provides the wearer with crucial information including fuel levels and safety performance indicators, while it is also equipped with Wi-Fi for ground monitoring.

Browning isn’t the only high flyer in the media spotlight. In fact, the Daedalus jet pack has largely been overshadowed by a mysterious wearer of a jet pack spotted near the Los Angeles International Airport (LAX) flying at 6,000 feet. The FBI is investigating.

Peter Suciu is a Michigan-based writer who has contributed to more than four dozen magazines, newspapers and websites. He is the author of several books on military headgear including A Gallery of Military Headdress, which is available on Amazon.com. This article first appeared in October 2020.