Ruger American: This American Pistol Has Tons Going For It 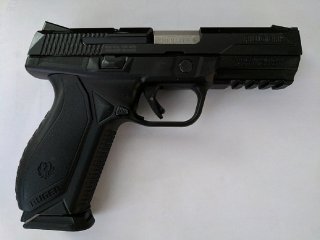 Here's What you Need to Remember: In reliability tests, Ruger has tested the American Pistol to twenty thousand rounds without issues; an outside test ran the pistol to 5,500 rounds with only one misfeed which the user blamed on the ammunition used.

In a field of storied American gun manufacturers, some of whom date back to the nineteenth century, one of the strongest is actually fairly new to the scene. The Sturm Ruger company was founded in 1949 by Alexander Sturm and Bill Ruger. Sturm Ruger became well known for revolvers, including the Ruger Security Six and the Ruger Redhawk, and rifles such as the Hawkeye, Mini-14 and Ruger 10/22.

In the mid-1980s the advent of the “Wonder Nines”—large capacity polymer-framed handguns—caught Ruger and many American gun makers flat-footed. Although outside of Ruger’s traditional field of expertise, the company quickly responded with the now-discontinued P-series handguns. In the mid-2010s the U.S. Army’s Modular Handgun System (MHS) contract promised sales of one hundred thousand handguns to the Army alone, and the rest of the services would likely fall into line behind the Army. Ruger designed the Ruger American Pistol for the MHS contract but ultimately declined to actually enroll in the competition. The pistol was released to the civilian market in 2015.

The Ruger American Pistol is like most pistols these days a locked-breech, short-recoil pistol. Unlike most pistols, the serialized part—the part technically considered a firearm—isn’t the lower receiver but actually a removable chassis made of billet stainless steel that contains the fire control group. This provides strength and durability to help with higher pressure +P loads, which the pistol is rated to use on a regular basis. The billet in turn is seated in the polymer frame. This is similar to the Sig P320 chassis in execution. Theoretically, this lends itself to using different sized frames should the user want to switch things up although such frames have yet to materialize.

The Ruger is a striker-fired pistol with a 5.5-pound trigger. It is available in both nine-millimeter Luger and .45 ACP, with the former taking a seventeen-round magazine and the later a ten-round magazine. The base service model has a 4.2-inch barrel, an overall length of 7.5 inches, and a weight of thirty ounces. New compact versions of both feature a slightly shorter barrel and overall length while retaining the same size magazine. The Ruger American Pistol is equipped with low-profile Novak sights and a Picatinny rail underneath the barrel that allows for the mounting of lights and laser aiming devices.

Ergonomics on the American Pistol are excellent. The gun has aggressive slide serrations and checking on the front strap and backstrap for a firm grip. The pistol also comes with three different backstraps to adjust to the shooter’s hand, an increasingly common feature and a key requirement for the Army’s Modular Handgun System. Left-handed shooters will appreciate that the Ruger American Pistol is fully ambidextrous, with slide stop, safety, and magazine release all fully usable by left or right-handed shooters.