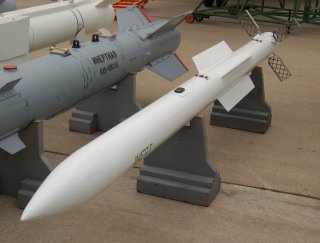 Here's What You Need to Remember: The upcoming R-77M variant for use on the Su-57 is exciting, with the possible AESA seeker and return to a traditional fin layout. There also is the version that’s powered by a ramjet, the R-77PD. This version was seen at MAKS 2001; however, it has not been seen since, and development is believed to have stalled or been canceled.

The R-77 air-to-air missile, which will be the primary air-to-air armament of the upcoming Su-57, has had a troubled development compared to its American counterpart, the AIM-120 AMRAAM. Starting life in the 1980s as a Soviet developmental program aside the AMRAAM, its testing and development dragged on due to the collapse of the Soviet Union. It was only adopted in 1994, two years after the AIM-120’s first operational kill during Operation Southern Watch. However recently it has seen a revival, arming some Russian fighters operating over Syria. It also has seen considerable export success. Its manufacturer, JSC “Tactical Missiles Corporation” is now working on an upgraded version that is to arm the Su-57 that includes a new AESA seeker, a technology that has not been included on the AMRAAM (although the Japanese AAM-4B has one).

Technologically, the R-77 is an active-radar homing missile, meaning that the seeker itself has a small radar that sends out radar pulses to detect the target and then uses that information to home in on the target. The current R-77 and R-77-1 use mechanically directed doppler radar without AESA, while rumored future variants will use AESA, in which the radar beam can be electronically directed with greater precision and speed (the use of AESA does not preclude the use of mechanical direction; modern Russian radars have been seen with both). The missiles also possess inertial guidance. Aerodynamically, the R-77 is distinctive among air-to-air missiles in that it uses grid (lattice) fins, an innovation that greatly increases the surface area versus traditional fins. This allows the R-77 to maneuver at higher angles of attack. These fins are also foldable allowing the R-77 to be placed on internal missile bays of some aircraft. The R-77 also uses a laser proximity fuze, in contrast to the AIM-120, which uses a radar proximity fuze. The laser fuze is immune to ECM by design principle; however, the AIM-120’s fuze is said to be designed to be resistant to ECM as well.

So why have we seen the R-77 deployed operationally only recently, despite its adoption in 1994? One of the primary reasons for this is the lack of integration onto the Russian Air Force’s primary fighter, the Su-27. At the time of the breakup of the Soviet Union, the primary air-superiority fighter of the Russian Air Force, the Su-27S, could not use the R-77. In the tactical-fighter realm, only the MiG-29S (9.13) could use it, and this aircraft was far more limited in radar capability relative to the Su-27S, limiting its utility in air-to-air combat. (While interceptors like the MiG-31M have been seen with the R-77, these are unlikely to be used in a dogfight.) Only in 2004 did the Russian air force start modernizing its Su-27S fleet to the Su-27SM standard, which could carry R-77s. The fighters seen carrying R-77s recently in Syria are Su-35S, which only began deliveries in 2013. Overall, this points to a lack of urgency in fielding R-77 capable aircraft until recently. Presumably, this is because of the lack of real air-to-air confrontations that the Russian Air Force saw to be in its future in the 1990s and 2000s. Most of the conflicts that Russia was involved in were primarily counterinsurgency wars, or against weaker powers like Georgia with limited air forces. Only recently has Russia been using its air force in a position which puts them in possible contention with countries with air forces with peer capability. In comparison, the USAF saw a lot of air-to-air action during the AMRAAM’s initial fielding period in the Middle East and Balkans.

Even then, the original R-77 was not really produced in large numbers. Fewer than three hundred were produced after its adoption, mostly used for training and testing. Only the later R-77-1 was produced in large numbers. This is the missile that has been seen mounted on Su-35S aircraft in Syria. While they were only first ordered in small numbers to arm the Su-35S in 2009, followed by a larger one in 2012. Finally, a thirteen-billion-ruble order for these missiles was placed in 2015, which shows that the Russian Air Force is finally procuring these missiles in number.

Where the R-77 really was a success for Russia was on the export market. The R-77 is called the RVV-AE on the export market (all export versions of missiles produced by JSC “Tactical Missile Corporation” carry RVV designations: RVV-AE for R-77, RVV-SD for R-77-1, RVV-BD for the R-37M and RVV-MD for R-74). Many foreign operators of Su-27 and MiG-29S/MiG-35 variants, most notably Su-30 operators such as India with the Su-30MKI and Algeria with the Su-30MKA, have ordered RVV-AEs. While this is not as many countries as those that operate AMRAAM, the cheaper cost of the RVV-AE (said to be around half that of an AMRAAM) has made it popular with countries with smaller budgets that still wanted the performance increase that the RVV-AE gives over previous R-27 semiactive radar homing missiles. The RVV-SD is also looking to be an export success as the MiG-35 and Su-35S are also being exported, both of which can fire this missile. Given Indonesia’s recent selection of the Su-35S, the inclusion of the RVV-SD in this contract is logical. RVV-AE has also been offered as a surface-to-air missile like SLAMRAAM, but has found no customers.

So what’s next for the R-77 missile? The upcoming R-77M variant for use on the Su-57 is exciting, with the possible AESA seeker and return to a traditional fin layout. There also is the version that’s powered by a ramjet, the R-77PD. This version was seen at MAKS 2001; however, it has not been seen since, and development is believed to have stalled or been canceled. If it does make a comeback, it would give the R-77 series a significant boost in range, going out to possibly beyond 180 kilometers at Mach 5, compared to the Mach 4 of the AMRAAM. Murmurs in the Russian defense community have been suggesting that it might have returned to development, as at a weight of around 225 kilograms, it’s far lighter than the R-37M long-range missile, which weighs six hundred kilograms. This would allow for it to be possibly carried in internal bays of the Su-57, due to the grid fins and smaller diameter of the missile.