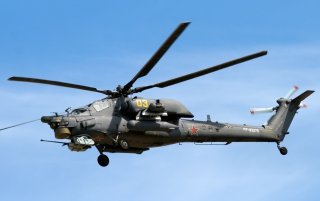 Here's What You Need to Remember: The real issue is that attack helicopters aren’t intended to be dogfighters. “The Apache is designed to dominate the [ground] battlefield with massed fires,” Mitchell said. “They are not designed to go around looking for airplanes to shoot down.”

The Mi-28NM “Night Hunter” will be armed with the same R-74M heat-seeking missiles designed for advanced jet fighters, according to Russian media. But some experts warn that the United States armed its helicopters with anti-aircraft missiles during the Cold War, and that using choppers for air combat isn’t as easy as it looks.

“The latest Russian Mi-28NM attack helicopter will turn into a fighter capable of handling enemy aircraft, drones and cruise missiles,” according to state-owned newspaper Izvestia, citing Russian defense industry sources. “Powerful R-74M ammunition will be installed on board the rotorcraft to destroy air targets. They are able to bring down even fifth-generation aircraft.”

The Mi-28NM is an upgrade of the Mi-28 Havoc—the leaner successor to the chunky but tough Mi-24 Hind “flying tank” of Cold War fame. The Mi-28NM has a mast-mounted fire control radar for night operations. The R-74M—also known as the RVV-MD—is an upgraded R-73 (NATO code name: AA-11 Archer) short-range, infrared-homing air-to-air missile. The Archer, with a reported range of about twenty-four miles and an off-boresight capability that allows it to lock on to targets to the side of the launch aircraft rather than just in front, can be a dangerous weapon in a close-range dogfight.

The “R-74M was originally developed taking into account the possibility of defeating fifth-generation fighters F-35 and F-22,” Izvestia said. “Neither an attempt to escape the afterburner nor intensive maneuvering will save the rocket. The homing head is not afraid of electronic interference and thermal decoys imitating the enemy.”

Though Izvestia mentions the Mi-28NM/R-47M shooting down fixed-wing aircraft, drones and cruise missiles, the article most talks about the Night Hunter going after enemy helicopters. In particular, the Russians seem determined to destroy U.S. AH-64 Apache attack helicopters. Should U.S. forces ever encounter Russian tanks, the Apaches and their Hellfire missiles would prove deadly.

The idea appears to be to station Mi-28NMs behind cover such as hills, and then ambush the Apaches as they fly past. “A helicopter may be invisible to radars because of the terrain,” a Russian pilot told Izvestia. “You pass over it without noticing, and then a rocket flies at you from behind.”

“The Mi-28NM will easily knock down the American AH-64 Apache,” the Russian pilot said.

But the idea of arming helicopters isn’t exactly new. In fact, back in the 1980s and 1990s, the U.S. Army equipped it's OH-58D Kiowa scout helicopters with Stinger missiles—the same man-portable air defense (MANPADS) used by ground troops for air defense.

Robert Mitchell, a veteran U.S. Army helicopter pilot who is now director of the Army’s Aviation Museum at Fort Rucker, Alabama, helped run the training for those missions. “The Stinger was a known quantity,” he recalled. “It was a MANPADS, but easily adapted to be launched from an aircraft.”

Initially, the Stingers were intended for Apaches, but they ended up arming the Kiowas, which were intended to fly security for ground troops and other helicopters. But there were challenges using the Stinger. For example, the Stinger came in a launch tube, with the missile’s infrared seeker tucked toward the back of the tube—which made locking onto targets difficult. “As a MANPAD, it’s not a big deal,” Mitchell said. “The soldier on the ground locks the sight on a heat source. But on an aircraft, you have to move the aircraft around to acquire the target.”

In addition, helicopters tend to fly at low altitudes over the battlefield, which makes it harder for air-to-air missiles to lock on to their targets. If U.S. helicopter pilots encountered enemy jet fighters, they were taught to turn and fly at the target while zigzagging to force the enemy pilot to maneuver.

As the Cold War ended and the U.S. Army focused on counterinsurgency, the Kiowa-Stinger program faded around 2000. But with the Pentagon now preparing for mechanized warfare against Russia and China, it might come back, Mitchell predicts. “It’s an idea that comes and goes. It will come up again.”

Mitchell believes an air-to-air missile—like the Sidewinder carried by jet fighters—would have worked better than the Stinger. But he believes the most effective air-to-air weapon on a helicopter is its cannon. “For air-to-air combat, the 30-millimeter cannon on the Apache was always my favorite weapon.”

The real issue is that attack helicopters aren’t intended to be dogfighters. “The Apache is designed to dominate the [ground] battlefield with massed fires,” Mitchell said. “They are not designed to go around looking for airplanes to shoot down.”

Michael Peck is a contributing writer for the National Interest. He can be found on Twitter, Facebook. or on his website. This article first appeared last year.