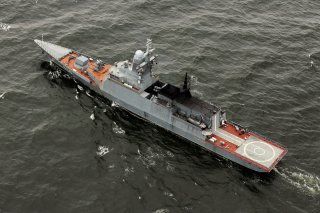 New Russian Navy ships recently fired artillery and cruise missiles in the Sea of Japan as part of a visible move to increase its offensive maritime warfare presence in the Pacific. But this development could easily fall beneath the radar given the attention now being paid to China’s fast-growing navy and escalating U.S.-China tensions in the region.

However, Russia is quietly strengthening its Naval fleet, adding new weapons to surface ships and engineering new, quasi-stealthy corvettes built for the Pacific. A recent essay published by Russia’s TASS news agency reports that its latest Project 20380 Corvette, called the Aldar Tsydenzhapov, conducted its first artillery fire and launch of an Uran cruise missile against a naval target as far as 40km away.

The new corvette also tested its air defense weapons during Sea Trials in the Sea of Japan as part of the effort to fire off artillery at coastal targets.

“At the combat training range near Zheltukhin Island, the ship conducted artillery fire to suppress invisible coastal targets hidden by the terrain, eliminating the targets simulating a notional enemy’s sheltered fire emplacements and combat hardware, and visible targets on the coastline. The fire was delivered from a 100mm A-190 multi-purpose shipborne artillery gun,” the press statement from Russia’s Pacific Fleet said.

The Russian war ops in the Pacific are also intended to refine multi-domain warfare tactics through the use of Tu-22M3 missile-armed bombers and Su-35 fighter jets to conduct maritime combat operations in connection with the corvette. The war preparations raise interesting questions about the level of technical maturity of Russia’s air-surface networking and information sharing.

Russia’s ability with electronic warfare is fairly well known, given its use in Ukraine in 2014, yet its technological capacity to conduct multi-domain warfare networking stealth fighter jets to bombers and surface ships may be more mysterious. Certainly, any such effort corresponds to heavily emphasized U.S. and allied initiatives to advance interoperability and cross-domain functionality.

Also interestingly, the Russian essay makes reference to the stealth properties of the corvette, stating that its construction is incorporating “radio absorption materials and specially designing the ship’s hull and superstructure.” A quick look at the ships configuration confirms this as it appears to have a rounded bow and smooth, curved exterior, part of an apparent effort to minimize the return signal generated back to radar systems seeking to locate or target the ship.

The Project 20380 third corvette is designed to accomplish green-water missions, fight enemy surface ships and submarines and provide artillery support for amphibious assault operations. In addition, they are armed with multi-purpose artillery guns, surface-to-air missile/artillery systems, supersonic missiles and automatic artillery launchers; they carry a Ka-27 helicopter, displace 2,200 tonnes and have a crew of 99, TASS reported.