Russia’s SU-35 Is a Killing Machine without a Target 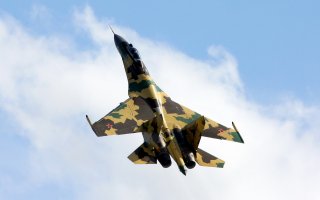 Here's What You Need To Remember: While other Russian jets such as the Su-30SM and the outstanding Sukhoi Su-34 Fullback bomber have had a chance to show off their capabilities in the air-to-ground realm in Syria, the Su-35 has not.

Nonetheless, the Sukhoi Su-35S Flanker-E is the most potent fighter currently in operation with the Russian Air Force and offers good capability at reasonable prices. The airframe is high flying, fast, and carries an enormous payload. That, combined with its advanced suite of avionics, makes the Su-35 an extremely dangerous foe to any Western fighter, with the exception of the stealthy Lockheed Martin F-22 Raptor.