Russia’s Submarine Fleet Is Getting Bigger and Badder 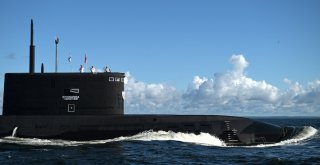 Here's What You Need to Remember: Moscow operates as many as sixty-four submarines, and many of them are known for their sophistication in certain areas such as air-independent propulsion and other undersea warfare technologies.

While Russia may have pulled back large numbers of ground troops near the Ukrainian border, perhaps in response to a clear message of deterrence and resolve from the West, Pentagon concerns about Russian provocations and potential interference in the region have likely not disappeared.

“Putin isn’t one to stay on the retreat. So, where should we expect his next provocation? Very likely, the waters of the Black Sea,” Retired Adm. James Stavridis writes in an opinion piece in Bloomberg.

Stavridis raises an interesting point, as many people are likely to wonder about the extent to which Russia could present a serious threat to the U.S. Navy and its NATO allies in the Black Sea. While Russia may not be likely to launch any kind of massive Naval offensive attack anytime soon, there are certainly a number of ways it could threaten the United Statesand its NATO allies in the Black Sea and present a serious threat.

The U.S. Navy operates regularly in the Black Sea by conducting patrols with destroyers, various surface ships and maybe even submarines and there have at times been moments of considerable tension between the United States and Russia over the years. However, Russia’s arsenal of tanks, fighter jets and land weapons seem to make it a much more serious land threat than it might present at sea. For example, Russia only operates one aircraft carrier and fifteen destroyers, according to Globalfirepower.com, a mere fraction of a sizable U.S. Navy attack force able to launch offensive maritime missions and of course project power from multiple carriers.

However, Russia is reported to operate as many as eighty-five Corvettes and fifty-five Patrol Boats able to conduct hit-and-run surface strike missions, search for submarines or simply sustain some kind of Naval presence.  Shallow-draft, maneuverable ships such as Patrol Vessels or even Corvettes might be able to operate in closer proximity to the Bulgarian and Romanian coastline to threaten land-attack, regulate commercial shipping, conduct mine countermeasures missions or even launch swarming small boat attacks against NATO assets.

Also, having a much smaller number of destroyers compared with the United States does appear significant, yet the most substantial margin of difference may be the range, precision and targeting accuracy of its onboard weapons systems, maritime drones, sensors and ship-based radar. That being said, certainly, a much smaller fleet of surface warships armed with weapons or able to launch air assets such as helicopters or attack drones would put the Russian Navy at a decided disadvantage should it encounter the U.S. Navy.

There is, however, another factor with this that cannot be overlooked, and that is the size and sophistication of Russia’s submarine fleet. Globalfirepower.com reports that Russia operates as many as sixty-four submarines, and many of them are known for their sophistication in certain areas such as air-independent propulsion and other undersea warfare technologies. Advanced Russian submarines would of course make it very difficult for U.S. Navy surface warships to operate freely or without careful monitoring in the Black Sea.