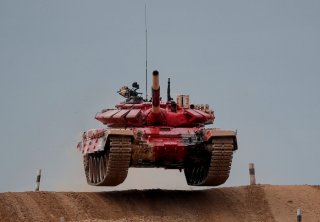 Here's What You Need to Remember: The T-90M also retains the Shtora Active Protection System (APS) from earlier T-90 variants. The distinctive “eyes” that formed the Shtora jamming component are removed, but the capability to detect missile launches and automatically deploy smoke is retained.