Russia and China's Worst Nightmare: The New B-21 Stealth Bomber 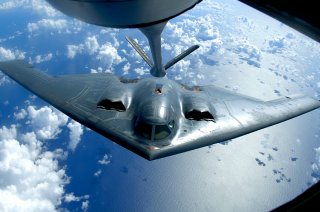 The United States introduced the world to stealth technology with the F-117 Nighthawk way back in 1981, and now plans to extend its stealth dominance with Northrop Grumman’s B-21 Raider. This aircraft, meant to serve as the successor to the legendary stealth B-2 Spirit, is expected to combine elements of existing stealth aircraft like the F-35 Joint Strike Fighter with entirely new technologies and production methodologies. The result, the Air Force expects, will be the most advanced bomber ever to take to the skies… and just in time, as both China and Russia continue to pour funding into their own stealth bomber programs.

The B-21 is expected to enter service later this decades, with its first flight scheduled for next year. Once in service, it’s slated to replace both the B-2 Spirit and B-1B Lancer.

Related: THE ‘STEALTH FIGHTER’ THAT WASN’T: WHY WE KEEP GETTING THE F-117 WRONG

Watch “B-21 Raider: The Most Advanced Bomber Ever”

Northrop Grumman’s B-21 program has been a clinic in secrecy, with very few hard facts surfacing about the platform since the contract to build it was awarded to the aviation firm in 2015. What we know for sure is that the aircraft was purpose-built from the ground up to replace at least two-thirds of America’s aging heavy bomber fleet. Currently, the U.S. relies on the nuclear-capable B-52 Stratofortress, the supersonic B-1B Lancer, and the stealthy B-2 Spirit for heavy bombing missions the world over. Once the B-21 enters service, both the B-2 Spirit and B-1b Lancer will begin retiring out of service, with the mighty B-52 remaining on duty for decades to come.

Related: WILL RUSSIA’S FIRST ‘STEALTH BOMBER’ BE A DUD?

The single artist’s rendering of the B-21 Raider that’s been released thus far shows clearly that this new stealth bomber will lean heavily on the design of its predecessor, the B-2 Spirit, but the B-21 is expected to offer a significant improvement in stealth capabilities thanks to updated systems, improved radar-absorbent coating, and the same basic engine systems found in the F-35 Joint Strike Fighter. Thanks to America’s continued work on stealth technologies, the B-21 should be harder to detect than any bomber in history, but without the massive price tag associated with previous stealth programs.