Russia Can Now Win Any Shootout...Underwater 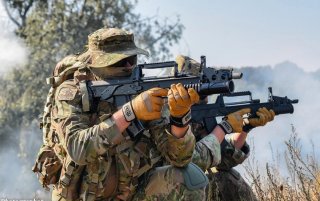 While modern military firearms can be exposed to some water and still operate reasonably well, few weapons can actually endure being submerged for more than a brief moment. And then there is the fact that weapons designed for use on land typically don't work as well underwater.

The Russian ADS assault rifle addresses those issues. It was designed specifically for special operations and thus is a truly "amphibious" weapon for use with underwater operatives ("frogmen") in the Russian Army. It was developed beginning in 2007 and first introduced in 2013. It is meant to replace the legacy APS (Avtomat Podvodny Spetsialnyy or "Special Underwater Assault Rifle"), which was designed in the Soviet Union in the early 1970s to fire a special 120mm long, 5.66mm caliber steel bolt.

It features a "bullpup" layout – meaning the magazine is located in the stock behind the receiver/trigger grip – which makes for a compact weapon that is just under 27-inches in length, yet still has a full 16-inch barrel, the same length of the standard AK-74 assault rifle. The ADS is a gas-operated, selective fire weapon that fires from a closed bolt and it has only a firing pin safety.

It is fitted with a Picatinny-type rail, and while it features simple iron sights, the rail allows for various scopes, red dot sights and/or night vision devices to be added as needed. A sound suppressor can also be mounted to the ADS. It also has an integral 40mm grenade launcher that can fire the VOG-25 series of grenades and has an effective range of nearly 450 yards.

What makes this a particularly innovative weapon is actually in its ammunition. The compact ADS is chambered for the standard 5.45x39mm M74 cartridge and is compatible with AK-74 magazines. For use in water – and that includes underwater – the ADS requires a specialized round that utilizes a longer bullet with a flat point at the tip, which creates a hydrodynamic cavity to minimize drag. This 5.45x39mm PSP ammunition still fits into the magazines, so special operators can be equipped with magazines that are outfitted and can be swapped out as needed.

On land with the regular ammunition, the effective range of the assault rifle is a respectable 550 yards, which is comparable to other standard assault rifles, and it has a muzzle velocity of about 1000 yards per second. When used underwater, the normal ammo will only have a range of less than 10 feet – which is why bullets with special tips are required. But with the special underwater ammo, the ADS is effective to 65 feet when under about 15 to 20 feet of water. That number does drop the deeper the user goes, however. It isn't clear how effective the PSP ammo is on land, but it likely lacks the range of the normal M74 cartridges.

Moreover, the performance of the PSP's ammunition in the water is slightly less than that of the APS, but with the ADS special operators can carry a single weapon instead of one that was only of use in the water, which is why the ADS is reportedly already in service with some Russian Naval special operations units.