Russia Has a Problem: Its Paratroopers Vastly Outnumber Its Supply of Planes 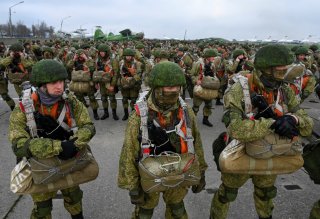 Here's What You Need to Know: Nostalgia for the glory days of WWII is an obstacle to resolving Russia's paratrooper surplus.

In other words, despite maintaining a multi-division airborne force, Russia only has the lift capacity to drop less than a division at a time. This problem was even recognized back in the days of the Soviet Union.

“It is impossible to change the situation that has developed with the shortage of aircraft for the use of the VDV based upon its primary designation in the foreseeable future—this would require a multi-fold increase of the strength of military transport aviation,” writes Kramnik. He adds that “this raises definite questions with regard to the effectiveness of the expenditure of budget resources while taking into account the high cost of specialized parachute equipment and the jump training of personnel.”

Of course, transport planes can fly more than one sortie. But as the Allies discovered during the failed Operation Market Garden airborne landings in September 1944, airdropping troops in multiple waves is dangerous. It means fewer troops on the ground in the first wave when the element of surprise—the airborne’s supreme asset—is greatest and lightly armed paratroopers can most easily secure their objectives.