Russia Has Weaponized Dolphins (Yes, the Headline Is Correct) 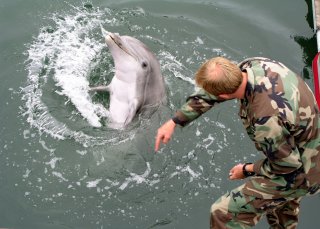 Here's What You Need to Remember: Beluga whales, which can weigh up to 1.75-tons, have strong echolocation capabilities and can dive up to 700 meters deep—deeper than all but a few military submarines. Both the Soviet Union and U.S. military have trained beluga whales for military purposes, as well as larger numbers of dolphins, sea lions, and seals.

On April 22, 2019 fishermen off the coast of northeastern Norway were approached by an unusually friendly beluga whale, as reported by Norwegian periodical NRK. The adorable pale white cetacean repeatedly rubbed against fishing boat hulls, attempting to dislodge a yellow harness on its back.

Two days later the four-meter-long Beluga was lured with cod fillets by a fisheries boat. A fishermen jumped into the water and removed the harness. You can see a recording of the peculiar incident here.

The harness had a clip apparently for mounting a camera, and the words “Equipment of St. Petersburg” written on a buckle. A similar yellow harness, this time mounting a camera, can be seen on a sea lion trained by the Russian Navy in a 2018 Russia Today article. Related screen captures can be viewed here.

As no Russian civilian research programs reported the loss of a whale, it is widely believed (though not officially confirmed) that the friendly beluga escaped from a Russian military program presumably training whales for surveillance of Scandinavian waters. Since 2014, Russian forces have increasingly targeted Norway and Sweden with mock attack runs and surveillance missions.

Beluga whales, which can weigh up to 1.75-tons, have strong echolocation capabilities and can dive up to 700 meters deep—deeper than all but a few military submarines. Both the Soviet Union and U.S. military have trained beluga whales for military purposes, as well as larger numbers of dolphins, sea lions, and seals.

In the early 1960s the U.S. Navy began training marine mammals to retrieve underwater objects and detect infiltrating swimmers. Dolphin and whale echolocation amounted to an incredibly precise form of active sonar. Furthermore, due to their high levels of intelligence, marine mammals could be trained to retrieve objects or even drag swimmers to the surface using operant-conditioning methods.

The Navy deployed dolphins and sea lions to guard ships in Cam Ranh Bay, Vietnam, and Bahrain, and to search and mark naval mines in the Persian Gulf and the Iraqi port of Umm Qasr. Today, the San Diego-based Marine Mammal program musters around seventy-five dolphins and thirty sea lions—half its Cold War peak.

In 1965, the Soviet Navy responded by opening its own marine life program on the Black Sea, based near Sevastopol on the Crimean Peninsula. A second center on the Arctic Ocean, the Murmansk Marine Biological Institute, was opened in 1984.

The Soviets feared sabotage by naval commandos, which also explains their development of a diverse family of underwater small arms. NATO benefited from the expertise of Italian Navy frogmen, who during World War II had infiltrated Allied harbors and used limpet mines to cripple two battleships, a cruiser and numerous other vessels.

A declassified 1976 CIA report reveals that the Soviet marine mammal program initially suffered severe deficits of scientific expertise and professional handlers. Dolphins died in droves from being fed un-thawed frozen fish, lack of prophylactic medical care, and inadequate environmental conditioning. Reportedly only two out forty-seven dolphins survived transportation to the facility. By 1974, the number “improved” to two survivors out of fifteen.

Object retrieval and reconnaissance was part of the Soviet program. On one occasion, Soviet dolphins located a prototype Medevka anti-submarine torpedo. The Soviet Union also tested a device designed to transmit the returns of organic dolphin sonar to help detect intruding submarines.

However, former dolphin instructors have repeatedly emphasized that “combat dolphins” were trained for lethal attacks.

Soviet scientist Gennady Matishov describes the tactics in an article by Nicholai Litovkin:

Their main role is to protect the waters of the fleet's principal base against underwater saboteurs. For instance, the bottlenose dolphins 'graze' at the entrance of the bay and, on detecting an intruder, immediately signal to an operator at a coastal surveillance point. After that, in response to the relevant command, they're capable of killing an enemy on their own with a special dolphin muzzle with a spike.

Matishov goes on to describe another novel defensive scheme developed by the Northern Fleet that could have come out of an Austin Powers flick.

“The naval command's idea was to deploy beluga whales at entrances to bays as sentries. If they detected an enemy, they were to signal their discovery to a handler, who was to release killer seals from their cages.

Supposedly, the Belugas proved “unsuitable” in arctic waters, so the navy focused on bearded seals instead. These proved scary during a counter-sabotage exercise:

Marine commandos were ordered to infiltrate a submarine base unnoticed and mine the vessels. But we did not warn the lads whom they would be up against. Literally a few minutes after the handlers opened the cage doors and the seals shot off into the bay, all the commandos returned to the surface and tried to make off for all they were worth.

U.S. Navy SEAL Brandon Webb described a different kill mechanism in his memoir: mounting hypodermic needles full of compressed gas over the dolphin’s nose. The dolphins were trained to headbutt and inject the needles, causing an embolism with fatal results.

Russia also reportedly trained kamikaze dolphins to deposit limpet mines onto enemy submarines. Former handler Col. Victor Baranets told BBC they were trained to distinguish between the sounds of the propellers of Soviet and American submarines.

However, operationalizing such a concept would be difficult, considering the Soviet World War II experience deploying explosive-laden dogs trained to dive under Nazi tanks, tripping a detonator rod on their backs. Because the dogs were more familiar with Soviet vehicles, they frequently ran towards Russian tanks or even their own handlers with catastrophic results.

It’s hard to believe the Soviet Navy would trust dolphins swimming close to port to decide whether to blow up a submarine carrying dozens of crew members. Perhaps the Soviets had a concept for offensive deployment: Litovkin claims that “bottlenose dolphins were trained for airdrops from helicopters” to perform ‘special forces’ missions.

With the dissolution of the Soviet Union in 1991, the Crimea-based combat dolphin program passed to Ukraine. However, lacking funding the trained dolphins increasingly served as tourist attractions or therapy animals.

Finally, in 2001 the program’s manager Boris Zhurid sold the animals to Iran, claiming he lacked the finances to give them proper care. Twenty-six animals, including a beluga whale, four bottlenose dolphins, walruses and sea lions were transported by cargo plane to Iran.

It’s unclear whether Iran investigated a military use for military sea mammals. Most likely the Ukrainian dolphins were amongst those acquired for civilian use by the Kish Island dolphin park. Iran’s long coastline facing the narrow Persian Gulf make offensive marine-life operations hypothetically more practical. Tehran, incidentally, has accused Israel of using a camera-equipped dolphin for spying.

Meanwhile, in 2012 Ukraine reopened it its combat dolphin program with ten new dolphins trained to attack enemy intruders with “special knives or pistols fixed to their heads.” Just two years later, Kiev was about to close the program a second time when Russian forces seized the Crimean Peninsula—and refused requests to hand the dolphins back.

Some reports state the Ukrainian dolphins starved to death under Russian care. A Ukrainian spokesmen claimed the “patriotic” dolphins went on “hunger strike” due to their attachment to their Ukrainian handlers. Russian sources have variously claimed the dolphins died because of poor treatment by the Ukrainians, or that there were no dolphins remaining in the program to start with.

However, in 2016 the Russian government issued a tender for five dolphins, three male and two female, stipulating they must have “faultless teeth” and “impeccable motor skills.” These were eventually purchased from the Utrish Dolphinarium for the equivalent of $26,000.

Since then, Russian media has profiled the new dolphin training program, emphasizing its application for lethal attacks. While the U.S. Navy denies having trained killer dolphins or seals (likely not entirely truthfully), Moscow apparently sees the optics in a different light.