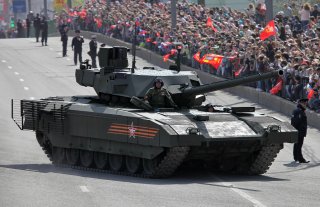 Here's What to Remember: One of the most interesting sections of this paper is an evaluation of the information war about Syria that has been underway between Russia and the West. The author notes that the West led by the United States has used “all means available,” to unleash propagandistic attacks “to smear Russia to the highest degree [最大程度地抹黑俄]” with the hope of sparking a “‘colored revolution’ that overthrows Putin… [颜色革命, 推翻普京].”

It has long been recognized that the closer alignment between Moscow and Beijing that goes back nearly three decades now provides each with ample political and diplomatic benefits. A less explored aspect of the relationship could examine how these partners learn from one another in various domains, including in the crucial area of strategy. I have pointed out in this forum before that Chinese strategists have looked carefully at the war in Ukraine and the related Crimea annexation. This edition of Dragon Eye takes a close look at a Chinese assessment of Russia’s military intervention in Syria.

China’s interpretation of the Syrian War could turn out to be quite significant. I have recently argued that Beijing could play a major role as one among several disinterested (and thus neutral) major powers in helping to fashion a diplomatic solution to the Gordian knot that is the Syria situation today. Such a role would be quite consistent with its ambitions to be a genuinely global power, providing global public goods for international security, and simultaneously facilitating the opening of vast trade corridors spanning Eurasia. Yet, there is a potentially darker side to China’s examination of the Syrian War. Indeed, there is a danger revealed in this late 2017 study published in the journal Russian, East European and Central Asian Studies [俄罗斯东欧中亚研究] of the prestigious Chinese Academy of Social Sciences. Put simply, that danger is that Chinese strategists could conclude that the Russian war in Syria provides a valuable paradigm for possible future Chinese uses of force in distant theaters as “anti-terrorism military operations [反恐军事行动].”

It is noted that the Syrian War has afforded Moscow a “test of the results of its military building program in recent years and the results of reforms [检验了今年来军队建设与改革的成果].” At the grand strategic level, the Chinese strategist suggests that the Kremlin views Syria as its “advanced post [前哨]” near the gate of the eastern Mediterranean. Thus, the intervention is also interpreted as confronting NATO pressure against Russia’s southern flank. The piece, moreover, lays out the case for why Russia’s intervention could be legal, while the U.S.-led coalition “has not received either the agreement of the UN Security Council or the blessing of the Syrian government.” The Chinese assessment also sounds a bit naïve in wholeheartedly embracing the Kremlin’s explanation that Russia “…is only fighting terrorism, and is not supporting any particular political force …”

Addressing momentarily the arguments of skeptics, this analysis explains that “… for Russia, it is important that it not be drawn into a long war…” It is noted that the West has begun to talk about Russia’s “second Afghanistan [第二个阿富汗].” But the author sees Moscow executing a “new type of war [新型战争],” relying on such methods as long-distance precision strikes, unmanned aerial vehicles (UAVs), surprise, and signals intelligence. Putin is cited approvingly as underlining the importance of preemptive attack against international terrorists [普京表示先发制人是打击国际恐怖主义唯一正确的途径]. The piece suggests that Putin has the backing of a broad internal consensus in Russia to fight against terrorism, perhaps arising from the fact cited by the author that Russia is a country that has suffered greatly at the hands of terrorists. By relentlessly fighting against terrorism, the author explains, Moscow has been able to portray itself as “the real friend of the Arab World. [阿拉伯世界的真朋友]” Moreover, Russia’s Syrian War has, according to this Chinese assessment, “broken the West’s hegemonic position in the region.”

In the end, this Chinese assessment concludes without reservations that Russia’s “international position and influence has increased” in the wake of the Syria intervention. Syria is on a path toward stabilization, so it is claimed, and the Kremlin has also vanquished the opposition forces supported by the United States, to boot. The intervention amounts to a “great achievement” [重大贡献]. Credit is even given to Russia for “alleviating the European refugee crisis.”

Many readers will be offended by this Chinese analyst’s evidently impudent conclusions. Undoubtedly, this reflects a one-sided appraisal and also the controlled nature of Chinese media reporting. Syria does not seem to be anywhere near on the verge of peace and Russia’s intervention appears to have had numerous problems, including obviously excessivecivilian casualties in Syria. Let’s also not forget the economic and human costs to Russia itself that are hardly negligible. After the last two decades of warfare in the Middle East that only seems to grow more chaotic, it seems a stretch bordering on absurdity to believe that any external power can successfully coax the region in a peaceful direction. The alternative of “disengagement” may well present the best alternative that allows local actors the autonomy to sort out their differences on their own.

Lyle J. Goldstein is a professor of strategy at the China Maritime Studies Institute at the United States Naval War College in Newport, Rhode Island. He is also an affiliate of the new Russia Maritime Studies Institute at NWC. You can reach him at [email protected]. The opinions in his columns are entirely his own and do not reflect the official assessments of the U.S. Navy or any other agency of the U.S. government. This article first appeared last year.