Russia Looks to Su-57 Fighter as Its Next Hypersonic Killer 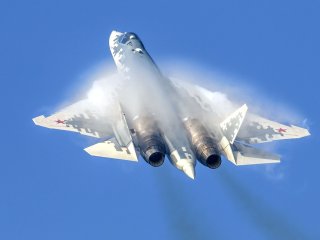 Here's What You Need to Remember: While it is unclear when the tests of the hypersonic missiles will occur, or how many Su-57s will be utilized in the tests, it could be seen as a major step forward for the Russian Air Force in its deployment of the advanced weapons.

Designed to combat and destroy a range of air, ground and naval targets, the Su-57 is a fifth-generation, single-seat, twin-engine multirole aircraft that combines the functions of an attack plane and a fighter jet.

"The first serially produced Su-57 was delivered to the Akhtubinsk center at the end of November. It will be used for testing the newest air-launched hypersonic means of attack," a source in Russia's defense-industrial complex told Tass last week.

State media also reported that a number of fundamentally new air-launched attack weapons are currently in development at the Tactical Missiles Corporation. While it is unclear when the tests of the hypersonic missiles will occur, or how many Su-57s will be utilized in the tests, it could be seen as a major step forward for the Russian Air Force in its deployment of the advanced weapons.

As Tass also reported, only the Russian MiG-31K fighters, which are stationed in the Southern Military District, are currently capable of carrying the Kinzhal hypersonic missiles.

According to state media reports, the first serial-produced Su-57 was delivered to an air regiment in the Southern Military District this month, and an additional four of the fifth-generation fighters are scheduled to be delivered in 2021. Earlier this month it was also reported that the Russian military would receive a total of seventy-six Su-57 fighters by 2028, with twenty-two of the aircraft arriving by late 2024.

The Sukhoi Su-57 is one of the most advanced aircraft developed in Russia. It features innovative technologies and was designed to employ new composite materials, which along with its aerodynamic configuration ensures that it has a low level of radar and infrared signature. The advanced aircraft is capable of developing supersonic cruising speed.

The multi-role combat jet is also furnished with the most advanced on board radio-electronic equipment, including a powerful onboard computer, which has been described as an "electronic second pilot," the radar system spread across its body and some other innovations, in particular, armament placed inside its fuselage.

What It Can Carry in War

The fifth-generation aircraft has two large internal weapons bays arranged in tandem, which run nearly the entire useable length of the aircraft. Each of the bays can carry up to four K-77M beyond visual range radar-guided missiles.

Compared to earlier versions of the K-77 (NATO nickname: AA-12 Archer) the K-77M missile has a larger body and active electronically-scanned array radar seeker, allowing it to engage highly agile targets at ranges of up to 100 miles.