Russia Is More Than a Mere Naval Power 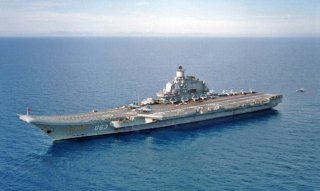 Here’s What You Need to Remember: The aviation capability of the Russian navy is dangling by a thread. Kuznetsov is old and in poor condition, and no carrier is even close to be laid down. The Russian surface fleet has not received a great deal of attention in the latest military modernization plans, and the Russian shipbuilding industry has not constructed a warship the size and sophistication of Kuzentsov since… well, Kuznetsov.