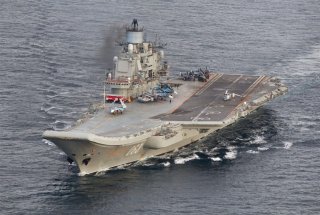 Here's What You Need to Remember: "Typically, a ship-based limitation that could put the recovery of fixed-wing aircraft at risk leads to a divert ops situation, so we’d need to be in relatively close proximity to land — say, 200 nautical miles or so.”

Kuznetsov — commissioned on Dec. 25, 1990 — is an older ship, but the vessel’s age is not the real issue. There are a good number of U.S. Navy carriers that are far older than Kuznetsov that operate perfectly well. Nimitz, Dwight D. Eisenhower, Carl Vinson, Theodore Roosevelt and Abraham Lincoln — are all older than the Russian ship.

Moreover, USS Enterprise — which was retired on Dec. 1, 2012, after more than 50 years in service — was just as ready to launch and recover aircraft on the day she was pulled out of service as she was the day she was first deployed in 1962.

The reason the U.S. Navy can operate a carrier for more than half a century is because the service maintains the material condition of its ships and has superbly trained crews.

The Russian Navy — especially over the past 25 years since the collapse of the Soviet Union — has not always properly maintained Kuznetsov. Nor has Kuznetsov’s crew been given enough of a chance to gain the requisite proficiency to safely conduct carrier operations at sea.

Cables break — it happens even onboard the U.S. Navy’s fleet of supercarriers.

Indeed, one particular incident I recall was when an old acquaintance of mine was nearly killed when a cable snapped onboard USS Kitty Hawk in 2005. His Boeing F/A-18F Super Hornet fell into the water and the ship nearly ran him and his weapons systems officer over.

Meanwhile, there was chaos onboard Kitty Hawk as the ends of the cable thrashed across the flight deck — damaging aircraft and injuring crew members. Accidents happen, but a broken cable leading to a mishap is exceedingly rare onboard U.S. Navy carriers.

Two accidents on Kuznetsov in less than three weeks is indicative of serious problems.

“Cables separate/break at some interval — and that’s big news usually leading to injury, death or mishap. The cable system breaking does happen regularly and they usually just remove it and work with less wires — two or three now with the new design,” one senior naval aviator told me. “The bottom line is that it’s very rare, sometimes preventable (settings, maintenance, etc.) and it’s big news when it happens.”

Meanwhile, the earlier loss of the MiG-29KUBR is indicative of poor decision making on the part of the Russian commander who should probably have diverted the jet to a shore base in Syria.

U.S. Navy carriers — when operating close to shore — will designate divert airfields in case there is a serious emergency where the ship cannot recover its aircraft.

Indeed, the carrier usually launches recovery tankers — aerial-refueling-configured Super Hornets — to ensure that jets have enough fuel to operate safely. While Kuznetsov does not have the ability to launch a tanker or even buddy-refueller configured fighters, the Russians should have designated a divert field for emergencies.

“When the carrier and air wing team first put to sea they are considered to be in divert ops until they pass their Combat Operations Efficiency (COE) evaluation, which is also called ‘blue water certification.’ We also use divert ops if there is an engineering casualty on the carrier, for example if we’re only using one reactor … whether by necessity or by choice,” another senior U.S. naval aviator told me.

“Typically, a ship-based limitation that could put the recovery of fixed-wing aircraft at risk leads to a divert ops situation, so we’d need to be in relatively close proximity to land — say, 200 nautical miles or so.”

As a force designed to project American power across the globe, the U.S. Navy has designed its procedures to enable safe carrier operations even in the middle of the ocean — far from any land bases.

“Blue water ops enable the carrier and air wing to conduct flight operations anywhere, anytime,” the second naval aviator said. “We utilize tankers to provide the required gas — ‘front side’ gas to give us more to train with, with ‘back side’ gas available as required when an aircraft’s fuel state gets low.”

Ultimately, it is not the age of its ships or the capabilities of its hardware that makes the U.S. Navy the globe-spanning titan that it is. It’s the quality of its training and the soundness of its procedures. Russia has long way to go before it ever comes close to matching American naval aviation prowess.

This article first appeared earlier. It is being reprinted due to reader interest.