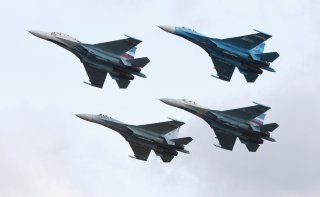 Here's What You Need to Remember: After the war, 17,000 Japanese civilian residents were deported, while those captured Japanese soldiers were interned in Siberia and many didn't return home until 1950. Today 19,000 Russian citizens lived on the island chain, and given the impending arrival of tanks it isn't likely they'll be leaving anytime soon.

The status of the islands has continued to sour relations between Moscow and Tokyo, and has contributed to the failure of an official peace treaty to mark the end of the Second World War.

While the most recent talks between Russia and Japan over the status of the islands was held in 2018, for now it appears that Russia won't readily evacuate. The Kuril Islands are garrisoned by the 18th Machine Gun Artillery Division, which is reported to be armed with S-400 Triumf surface-to-air missiles, Su-27 jet fighters, an improved Kilo-class submarine, ground-based anti-ship missiles and Ka-52 attack helicopters.

According to reports from Defence-Blog, Russia plans to deploy T-72B3 main battle tanks (MBTs) to the disputed territories.

The tanks aren't exactly state-of-the-art, but these could certainly be used to good effect to destroy any enemy assault force or even small enemy warships. The T-72B3 tanks have been upgraded with optical rangefinder sights and have the ability to fire guided missiles from its smoothbore 125mm main gun.

"The T-72B3 is a fairly modern vehicle," Russian military expert Alexei Khlopotov told Defence-Blog. "Compared to the base version, this version is equipped with an increased power engine, a thermal imaging sight, an improved fire and communication control system, and additional protection."

It remains highly unlikely that the Japanese military would ever mount an actual invasion of the islands, but the deployment of tanks also suggests that Moscow won't simply hand them over either. The islands have been an issue between Russia and Japan for centuries.

The islands, which had been originally populated by the indigenous Ainu people, came under Japanese administration in the 17th century under the Tokugawa Shogunate. The Japanese encountered Russian explorers from the Kamchatka Peninsula in the 18th century – and in 1855 the government of Edo Japan and Imperial Russia signed a treaty that recognized that the southernmost islands of Kunashir, Iturup, Shikotan and Habomai were Japanese while the Urup Island and everything to the north were Russian.

A subsequent treaty signed in 1876 gave Japan all of the Kuril Islands, while Russia obtained all of Sakhalin Island to the west. Following the Russo-Japanese War of 1905 Japan gained half of Sakhalin, which was settled by thousands of ethnic Japanese.

Prior to the attack on Pearl Harbor, the Imperial Japanese Navy's fleet assembled off Iturup Island – which was known for fogs that helped conceal the fleet buildup. During the Second World War the islands were attacked by U.S. B-25 and B-24 bombers.

During the Yalta Conference, President Franklin Roosevelt agreed to Soviet demands that the Kuril Islands be Soviet Union when the Soviets entered the war against Japan.

Under Project Hula, the United States secretly transferred some 149 ships to the Soviet Navy in preparation for the invasion of the Japanese held islands. The Red Army began its invasion on August 17, 1945 and due in part to heavy fog, the Japanese defenders were taken by total surprise. On August 23 the 20,000-plus strong garrison of the Imperial Japanese Army was ordered surrender as part of the general surrender of Japan. However, multiple units refused to follow their orders to lay down their weapons resisted Soviet occupation. While fighting wasn't intense, nearly 1,000 Soviet soldiers were killed and as many killed, while the Japanese suffered around 1,000 killed and wounded.

After the war, 17,000 Japanese civilian residents were deported, while those captured Japanese soldiers were interned in Siberia and many didn't return home until 1950. Today 19,000 Russian citizens lived on the island chain, and given the impending arrival of tanks it isn't likely they'll be leaving anytime soon.