Russia Will Hate Everything About The Royal Navy’s Next Submarine 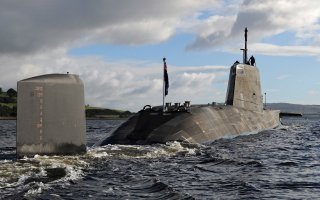 Here's What You Need to Know: The trend in submarine design is bigger and bigger hulls, manned by small and smaller crews.

Even though some Astute-class hulls are still being laid down, their replacement is being drawn up by the Royal Navy. Here’s why.

In a recent press release, the First Sea Lord Admiral Tony Radakin stated that 2019 was a bumper year for the Royal Navy. He explained that 2019 saw “the highest Russian activity in the North Atlantic for over 30 years. Submarines are getting quieter, more capable and harder to detect.” Perhaps as a result of Russian naval revanchism, the Royal Navy is “growing for the first time in 70 years. And between 2015 and 2025 our tonnage will increase by nearly 30 percent.”

While Russian submarine operations are definitely increasing, so are Russian naval capabilities. One striking example of new Russian navy tech is the much-vaunted Poseidon torpedo, which is reportedly both nuclear-armed and nuclear-propelled. The Royal Navy aims to counter the Russian Navy writ large—and this threat specifically.

One of the hulls that will push up the Navy’s tonnage is the successor to the Astute-class. Though the Royal Navy’s Astute-class successor does not yet have a name, some basic features of the class can be guesstimated thanks to open-source information available online.

It is highly likely that the Astute-successor will have the same nuclear reactor propulsion system as the Dreadnought-class. In keeping with British submarine design, the class will also likely have six torpedo tubes arranged in the lower half of the hull, with a bow-mounted sonar array above.

Also in keeping with the Astute-class, sonar will be bow-mounted, towed, and in a port-and-starboard flank arrangement, giving the Astute-successor a wide field of sonar detection.

The trend in submarine design is bigger and bigger hulls, manned by small and smaller crews. This is thanks to an increasingly large amount of automation. While this is certainly a boon to navies around the world, the human cost is harder to define. Fewer hands on deck may mean more crew rotations for things like normal day-to-day duties or standing watch—all of which raises the possibility of crew fatigue.