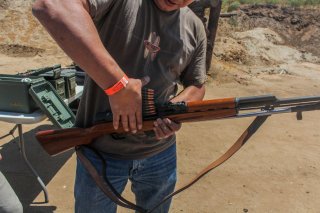 Here’s What You Need to Remember: While not the strictest in the world, Russian gun laws are notorious among Russian gun owners for their five-year waiting period. While a regular gun license is moderately easy to acquire for a law-abiding citizen with a good record of mental health, this license only allows a citizen to own smoothbore firearms—generally shotguns of various types. While shotguns are generally useful outdoors guns for most hunting and animal self-defense tasks, they are less than ideal for longer-range hunting or target shooting. But Russian gun owners are only allowed to buy rifles after owning smoothbore guns for five years.

As a result, most popular 7,62x39 firearm designs have versions in .366 TKM. AKs, RPKs, SKSs have all been produced in .366 TKM chamberings, primarily by the “Molot” weapons plant. .366 TKM weapons have been very popular, showing up on most Russian shooting channels as affordable and available alternatives to proper rifles. While not as accurate or long-ranged as proper 7,62x39 firearms, they are “good enough” at shorter ranges, and give rifle-like ergonomics and performance to those who would only be able to own shotguns before.

The success of .366 TKM led Techkrim and Molot to collaborate again on a larger version of .366 TKM called the 9,6x53mm Lancaster in 2017. Due to potential legal issues with paradox rifled guns due to shifting gun laws in Russia, Techkrim and Molot decided to make 9,6x53mm use Lancaster rifling, which relies on an oval-shaped smooth bore to impart spin on the bullet, which also is oval-shaped. As this is a different approach from the lands and grooves paradox rifling, it allows both companies to diversify their product line in the event of a potential paradox rifle ban.