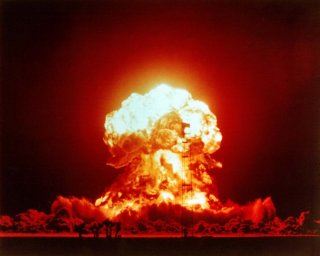 Here's What You Need To Remember: The Taran might not have killed the concept of a nuclear tank for the Soviets. One of the key features of the Object 195 tank prototype (considered by some to be the predecessor of the current T-14 Armata) was its ability to fire 152mm artillery rounds out of its main gun.

Some Russian sources have attempted to discredit the usefulness of a nuclear tank.

Sergey Kuznetsov claims that the Armata’s main gun has a range of 4 km. Ignoring that this probably applies to the current 125mm armed version and not the 152mm version that would be nuclear-capable, Russia itself has claimed that the Armata can acquire and destroy targets out to 12km.

Charlie Gao studied political and computer science at Grinnell College and is a frequent commentator on defense and national security issues. This first appeared in January 2019.