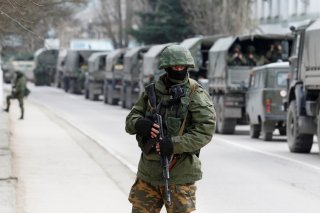 Recently Russian concern SPA Pribor announced it had developed plastic based ammunition for light artillery. While this may appear to be impressive and innovative at first, the trick is in the wording. Only a small portion of the ammunition is plastic.

The majority of Pribor’s new 30mm ammunition is still made of metal. The case is still fully metal, unlike some polymer cased ammunition. Pribor refers to the plastic part as the “plastic master device.” A more accurate translation of this would be a driving band.

Driving bands are generally used on bullets larger than 12.7mm (.50 caliber) to engage the rifling and “drive” the spin of the bullet. Most ammunition still uses driving bands made of softer metals like copper or lead. But the new Russian ammunition has a plastic driving band.

Is this new? Hardly.

The United States moved to plastic driving bands in the 1970s following the adoption of the massive GAU-8 cannon on the A-10 tankbuster plane. The gun’s rate of fire was so high that traditional driving bands would have caused the gun to undergo unacceptably rapid barrel wear. As a result, the 30x173mm projectile used in the gun was adapted to use plastic driving bands.

So why is Russia making a big deal of these new driving bands?

Russian vehicle autocannons can also reach far higher rates of fire than their NATO counterparts. Most modern NATO combat vehicles use some variant on the Bushmaster autocannon, which has a rate of fire that is generally less than 300 rounds per minute.

Comparatively, most Russian vehicles utilize the 2A42 autocannon can reach up to 800 rounds per minute in the anti-aircraft mode, resulting in very high barrel wear. The addition of plastic driving bands would allow these vehicles to use the “high” rate of fire setting without worrying as much about burning the barrel out.