The Russian Navy Is Flexing Its Muscles in the Mediterranean Sea 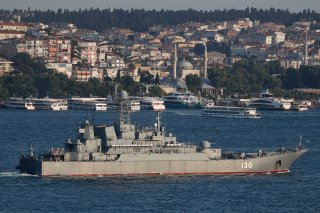 Here's What You Need to Remember: Russia faces severe challenges in maintaining a meaningful naval presence in the Mediterranean, Gorenburg points out. Russia’s economy is sputtering, the country’s shipyards have been plagued by delays, and supplying its Mediterranean forces through the Bosporus chokepoint in wartime could be a problem.

Russia is expanding its naval presence in the Eastern Mediterranean because it’s easier than trying to compete with the United States on the world’s oceans, according to Dmitry Gorenburg, an expert on the Russian military, in an analysis for the George C. Marshall European Center for Security Studies.